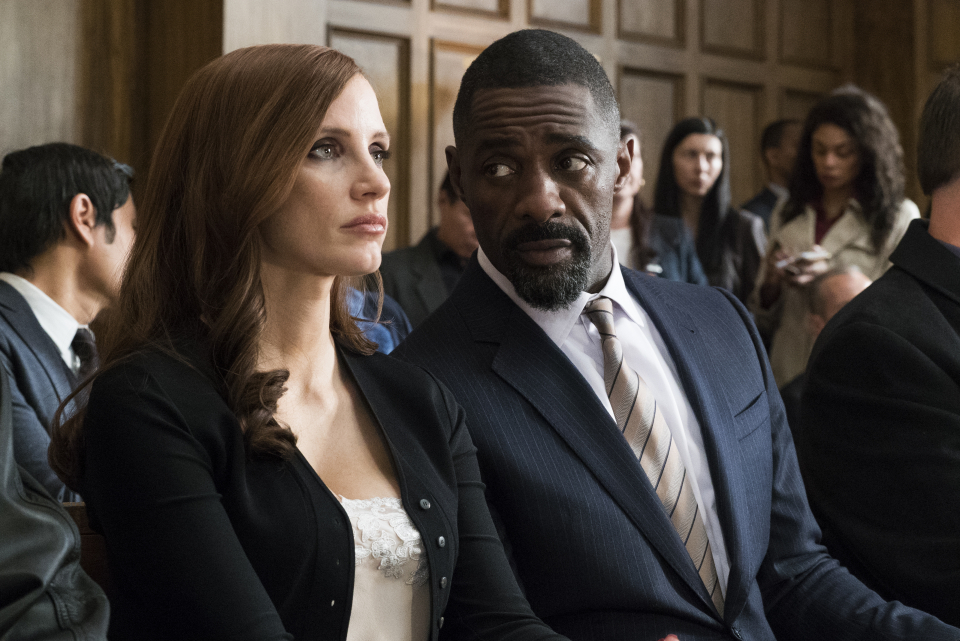 Idris Elba can be whomever he wishes onscreen. The British heartthrob is truly a great actor. He plays attorney Charlie Jaffey in the Aaron Sorkin-directed Molly’s Game, alongside Jessica Chastain, whose nominated for a Golden Globe (“Best Performance by an Actress in a Motion Picture – Drama”).

Molly’s Game, which also received a Golden Globe nom (“Best Screenplay – Motion Picture”), is based on the true story of Molly Bloom (played by Chastain), a former Olympic-class skier who operated an exclusive, high-stakes poker game for a decade that catered to Wall Street financiers and celebrities. Ben Affleck, Matt Damon, Leonardo DiCaprio and Tobey Maguire were among her clients. There was a $250K buy-in. The film is based on the tell-all book, Molly’s Game: From Hollywood’s Elite to Wall Street’s Billionaire Boys Club, My High-Stakes Adventure in the World of Underground Poker.

In way too deep, Bloom’s business attracted the Russian mob, and later the FBI, before she gets arrested. Jaffey has the responsibility to defend her. Flop, turn and river, check, raise or fold, he’s up for the task.

Here’s our interview with the versatile actor.

In the film Molly’s Game, you play Charlie Jaffey, an attorney and father. Where did you draw the character from?

I have played lawyers before … in smaller roles. I honestly think I didn’t pull it from anywhere. I trusted in the work of Aaron Sorkin. Aaron is probably the greatest screenwriter in modern times, in film. This is his creation. I trusted in Aaron’s direction. I really, really loved working with Jessica Chastain. She’s an amazing actor. I was really thirsty to do some Aaron Sorkin work. When I got the call to do it, I was beside myself.

Aaron Sorkin said you had the face for this character. Charlie Jaffey was very serious. I really like the dynamic between you and Jessica and the actress who plays your daughter. Are you that kind of dad in real life?

I am a lot more … softer than Charlie is with his daughter. My daughter is 15. We have these conversations about her schoolwork. It’s one of those things you have to do as a father, as a parent … talk to kids about their schooling. I think I am a lot more easygoing. It’s one of those things that attracted me to this role, was that Charlie’s relationship with his daughter is a part of the reason why he takes on Molly Bloom as a client when he prejudged her before that.

I kinda really respected that because sometimes your children tell you things; they’re truthful to their parents. Sometimes the answer is closer than you think and that is true of Charlie and his daughter Stella.

Literature was an important subject in this film. Top of mind, is there some literature that has shaped you as an actor?

You get a lot of work in terms of acting. How are you able to fit in your music and deejaying?

It is tough. It is a struggle if I am honest. But, it is a necessary one. I love acting. Sometimes being in the clouds with someone else in acting leaves you a little ungrounded. Music is very much about grounding who you are into the song, into the music, into the deejaying, into the crowd. I love that human connection.

I made this film a year and some ago, it was a while ago. You talk about it some time and you’re like “Oh yeah, that’s right.” When you make music, you perform it over and over again. You deejay. You do it live.

How are things going with your BBC show “Luther” which is set for season five?

We start filming in the new year. I am looking forward to getting back in the coat.

How was it working alongside Jessica Chastain?

She’s a really hard worker. We didn’t have the luxury of time on this film and had to do all of the scenes for this film in 10 days, which meant whenever we were on set, we were rehearsing, rehearsing, rehearsing. When we weren’t shooting, we were rehearsing tomorrow’s scenes. I found her to be incredibly focused, kind and collaborative. She wasn’t afraid to try things, to challenge herself a little bit. It was a good experience.

What are techniques you adopt to get you focused? How do you get in the frame of mind to finish a film in 10 days?

You really have to shut down outside influences. It is a very insular type of preparation, especially with someone like Aaron because you do have to memorize the words. With some scripts, I can just read it on the day [of filming] and [recite] the words. With Aaron, I had to really think about it. I literally had to shut my life out for 10 days. That’s the only way to prep for it. I would finish work, come home, go to bed, and in the morning, go straight to work. That was it. Nothing else.

Are you ever nervous?

Yes. I am nervous often. I think nervousness is a really healthy part of a performance. Your nerves are literally your intestines telling you something … a tingling feeling telling you, “You are alive. You are going for it right now.” I disguise my nerves pretty well, but I am always nervous when it comes to performing.

Molly Game is in theaters on Christmas Day.