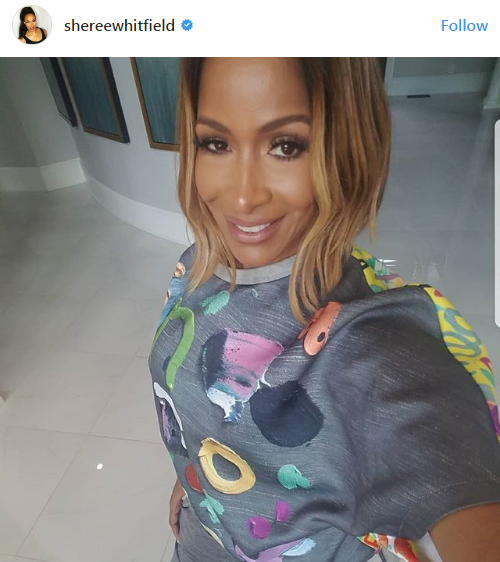 Sheree Whitfield is like many wives and baby mamas. “The Real Housewives of Atlanta” star reasoned that submerging the alleged physical and mental abuse she endured deep within the crevices of her soul would protect the psyche of her three children – and to ensure the male kids do not replicate their father’s alleged transgressions.

But when you are in the public eye, as Whitfield is on the ultra-popular Bravo TV show, aspects of your life that have been buried deep wind up being excavated and examined like a corpse. Therefore, Whitfield belived the right time to talk to her kids about the truth regarding who their father really was on the last episode of RHOA.

Whitfield discussed for the first time with her adult kids her abusive relationship with her ex-husband and their father, former Atlanta Falcon football star Bob Whitfield.

The first time that she ever mentioned the abuse that she had to endure during her marriage was in the previous season of the show, and she mentioned during the reunion that she suppressed the abuse. She claimed that she did that to protect her kids.

Since then, she became the ambassador for the National Coalition of Domestic Violence. She said that she would have never spoken about this matter again if the subject hadn’t popped up.

Whitfield discussed some new insight of the abusive relationship that she was in with her children Kairo (21), Kaleigh (18) and Tierra Fuller (32).

“I’m sure y’all are on the internet, Y’all heard the story about the domestic violence in the household,” she began.

“You know, I just kind of kept you guys away from, didn’t let you guys know what was going on. I just put on a happy face, but it was very toxic.”

Kairo was the most shocked of the three children when hearing everything that happened because Bob Whitfield never mentioned anything about the supposed abuse.

Kaleigh, the daughter and middle child, was already cognizant of her parents’ past and revealed the fact that her dad had tried to explain his actions, but she didn’t want to hear anything.

“Dad and I talked about it,” Kaleigh said. “He tried to explain the story to me, but I just drove off. It was after a soccer game, so I didn’t think it was appropriate.”

Sheree Whitfield wanted to discuss all of this with the kids so that they would learn that something like this is not acceptable under any circumstances at all.

“You need to know that nobody deserves to be mistreated,” she said.

“You know, sometimes girls are thinking, ‘He hit me, he loves me.’ That’s not true. That’s not the way life should be. I don’t want you guys to follow my footsteps.”