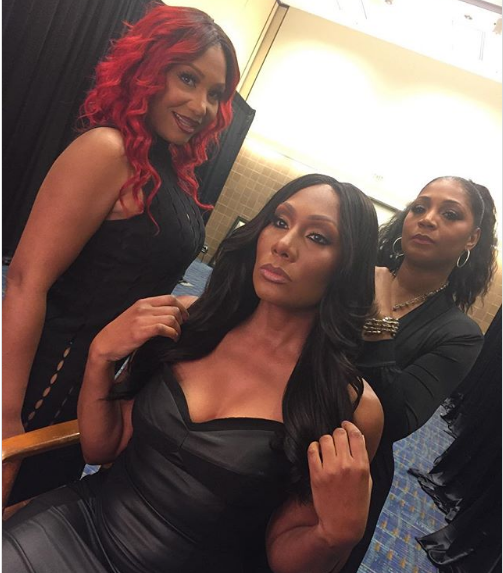 Tamar Braxton is embroiled in an imbroglio resulting from the divorce drama with her estranged husband, Vincent Herbert. And her sister Towanda Braxton has no sympathy for her sad saga whatsoever.

Tamar created a social media inferno on Saturday, Dec. 30 when she claimed that Vincent is expecting a baby with an anonymous woman named Camilla and is sleeping with former reality star Laura Govan.

When a fan contacted sister Towanda, 44, with needle-sharp barbs about Tamar, 40, getting what she deserves for belittling her sisters and their spouses, Towanda surprised many when she actually liked the following comment:

“We are all waiting for you to hear your perspective on ‘Tamar & Vince.’ You have always been truthful and objective. You can see when your sisters are right and wrong. I feel so sorry for Tamar, I love her, but is has been a very karmic few years for her. She put your ex-husband/father off the kids down for not having a job and then lost her job publicly. She bashed her sisters’ marriages and choices continuously and was the one living in the glass house all along. A reminder to work on all characters not just our reputations love all the Braxtons.”

The “Braxton Family Values” star was slammed for her action against the sister.

Many fans expressed disappointment with Towanda for the gesture against her own sister, with one stating, “Towanda liked another about having her sisters back, even if she does feel like it’s karma. I personally wouldn’t say anything, but she feels how she feels.”

Another fans said: “This exactly what’s wrong with the relationship now they publicly tear each other down and kick each other when they’re down I’d NEVER do my sisters like that correct each other in private protect each other openly.Tamar was wrong then, and Towanda is wrong now, they need to stick together no one is going to win at the end of the day if family is fighting.”

A third added: “So because one sister is messy, you do the same? I wouldn’t even entertain the foolishness that others say.I can’t recall Tamar being nasty and vicious when her sisters were going through hard times with their men. She was opinionated while they were together, but I don’t remember her being shady when the sisters were hurting.”