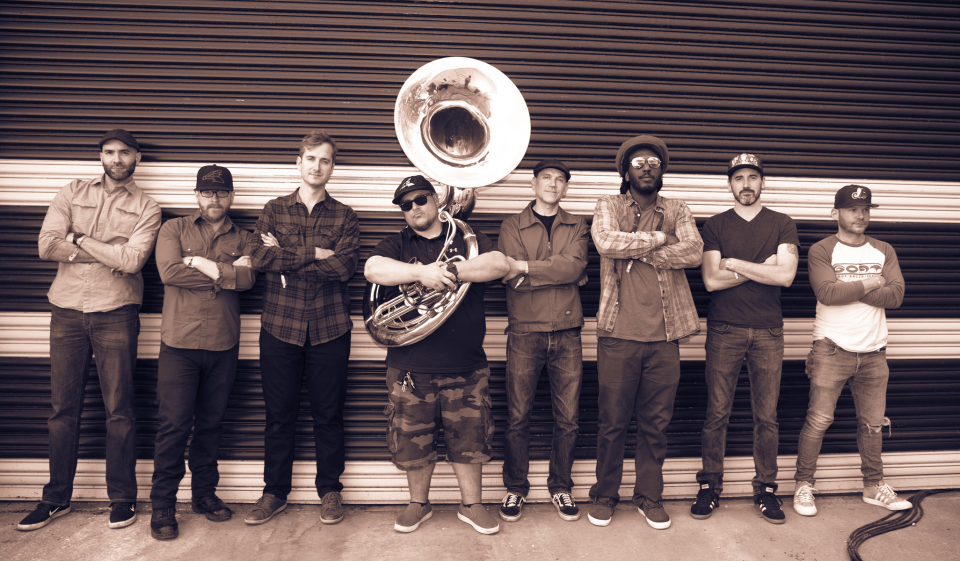 Lowdown Brass Band has been able to merge the jazz sounds of New Orleans with the stylings of Chicago and the grit of hip-hop to create something special. We spoke with Lance Loiselle, the band’s pianist and sousaphonist, about their newest project, Lowdown Breaks, and how they have managed to sustain this musical gumbo over the years.

What sparked the formation of the band?

Lowdown started around 2003 when most of the guys at that time had just graduated from DePaul [University] School of Music in Chicago. We had the love of brass band music from New Orleans,  we all played horns, were hanging out one night, and literally just decided to start a band. We were already playing in other groups together, trying to make a footprint on the jazz scene in Chicago. It was real loose back in those days — we were basically a NoLa cover band that used music stands. But we kept arranging, we kept writing, performing, the band kept evolving, and even though many of the people on the first record aren’t in the band anymore, there was a core that stayed.

Talk about your style of music and how you are able to mesh so many genres.

The music of New Orleans is, by definition, a melting pot, a gumbo if you will of styles and influences. It’s jazz, blues, rock Creole, Caribbean, African, Indian. So all of that music was already in our sound from doing second line music. We’re from Chicago another melting pot of all kinds of music the strong horn tradition that has been such a big part of the city like the music of Chicago or Earth Wind & Fire, or the great jazz and blues tradition, which we are all heavily influenced by. Billa Camp (our MC) has a love for punk rock, ska, hip-hop and reggae, his writing reflects that. Shane and John (our trumpeter and drummer) love reggae and play in a reggae band, they bring that element. And it’s impossible to live in Chicago and not be influenced by alternative rock, funk, hip-hop, soul, stepping music.

What is it about those horns that get people moving?

I think it’s the raw power of the instruments, trumpets, trombones, saxophones, sousaphone, all playing loud in a street volume, can sound super raw and make you feel so good. How in-your-face this music can be it’s amazing! And consider where it comes from. The music we play is street music and in that regard, you have to play loud to get people attention and you have to do things like put horn moves and dance moves in, and play percussion instruments, to get people’s attention on the street. Many performances we do are marches or second lines which that groove itself is impossible to sit still when you hear and feel the interaction between the sousa, the bass drum, and the percussion coming together. We take that energy to the stage and add the hip-hop, ska elements, it’s over. You just can’t keep still.

How much does New Orleans and Chicago inform your music?

At this point in our journey, the writers and producers or Lowdown don’t focus on emulating or recreating a style those diverse styles from Chicago and New Orleans are already there ingrained like a fingerprint. Trying to refine the sound through our concepts (Like LowDown Breaks) of writing and producing and perfecting other styles we are not so familiar with like salsa, or learning traditional reggae riddims, and always keeping it a collaborative process within the band’s writers and producers to keep that cohesive and diverse sound.

Talk about your newest release. What inspired it and what can people expect?

Lowdown Breaks was originally going to be an instrumental album and focused on sounding like original breaks (JB Horns, Parliament, Booker T, Incredible Bongo Band. We had worked with Billa Camp in the past (as well as the other cameos on the album by Ang13, DJ Alo and The Dread, Fada Dougou) and it became much more of an eclectic hip-hop album. The album took a little over two years almost to the day to record, mix, master, and reproduce and much of the writing was done before we started. Billa Camp became an important part of the writing and producing team during that time and it changed the sound of the album to one more focused on hip-hop, punk and ska, and how it mixes with Latin and second line, and not just break material with some sexy soul vocals. The music sounds like it is coming from all over and mashing into a big potpie. It opens with the second line, goes into hip-hop, melds into a soca Latin second line grooves, soothes over to an Afrobeat song sung in traditional African Dijoiala by Fada Dougou, there are a couple of interpretive covers on the album from The Specials’ “Ghost Town” to Lou Reed/Tribe Called Quest “Can I Kick It” and the poppy original “Dividends” It has literally something for everyone, yet it is unlike anything out there. And remember, this is all horns and drums for the most part so it holds onto the traditions of New Orleans and Chicago horn traditions.

There are a variety of ways we come up with new songs. There are 11 members of LowDown when we are all there. About half the band are writers, arrangers, producers. Sometimes one guy will come to the table with a song completely done, a beautifully arranged song and it’s a hit out of the box. We will sometimes have an arrangement in our head and that arranger will teach the parts to the band by rote (or by ear). In the case of Billa, he will then take the song and write a verse and hook, to the song. Billa may also bring a recording of a song he has produced and one of us will do a written arrangement. Then there is how a song evolves over performance, and the individual touches each one of us puts on the song with our personal musical styles. Certain lines or horn backgrounds will come up, or variations in the groove or slight changes in the vocals or form all of our songs evolve over time and that is kind of what makes them special.

Who are some of your greatest influences and why?

Dirty Dozen Brass Band. They changed the game for brass bands — made brass bands funky and not so traditional — and they are what most brass bands even today are patterned after

Tribe Called Quest, Gangstarr, and Digable Planets because they sampled jazz and evolved hip-hop in a new cool direction.

Jay-Z, Nas, Rage Against The Machine are all styles that encapsulate the styles of Billa Camp, including Zack DeLaroche and how he rocks as an MC with a band.

The Specials/Sublime/Fishbone/Bob Marley- ska and reggae bands we like.

Why should people listen to the Lowdown Brass Band?

Lowdown has something to offer every listener, jazz, ska, reggae, hip-hop, Latin, rock. So really it’s also about the evolution of music and how we can combine all those styles seamlessly, and also how this music something has staying power and is timeless. Lowdown makes just a feel-good music; music that makes you feel cool, even if you don’t know anything about jazz, blues, or the music of New Orleans.  Lowdown is the gateway drug to jazz. It’s new its fresh, its unlike anything that’s out there, the music and writing are creative, it’s deep, and it’s going to be around for a long time.