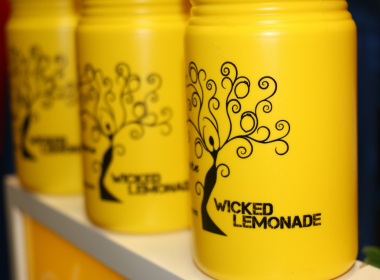 When you think of moonshine, you probably picture a man wearing overalls living in the backwoods sipping on a strong clear drink out of a Mason jar. That image will probably change in a few years due to Southern Wicked Lemonade (SWL).

Naomie Lucas, the founder and CEO of SWL, is on a mission to make moonshine a luxury brand. Southern Wicked Lemonade prides itself on producing all-natural, ready-to-pour, gluten-free alcoholic beverages. “There are no preservatives or any aftertastes like other alcohols and you don’t get the headaches,” says Lucas.

“I have roots in moonshine. My grandfather was a moonshiner,” says Lucas. “I want to take it from a backwoods feel to a luxury brand. Different countries claim different alcohols that they’ve created. With Russia, they claim vodka. The Caribbean claims rum. In Mexico, it’s tequila. In the United States, we claim three spirits we say we’ve ‘created’: bourbon, whiskey and moonshine. Moonshine is the only spirit that the United States has not been effective in exporting internationally. Also, moonshine is the only alcohol that has not been made into a luxury brand in the U.S. … I wanted to develop a brand of moonshine that says, ‘I shop at Saks Fifth Avenue and I drink moonshine.’ ”

SWL has been growing at a rapid pace. The company started with three people and now employs 30. Marketing development started in 2014 and it has only been 15 months since their first production run came off in October 2016. SWL was featured at the launching of the Yetunde Price Resource Center, which was founded by Venus and Serena Williams. From there the company was chosen to be featured in the official 2018 annual Grammys® swag bags. Presenters and performers will receive a bottle of SWL’s moonshine, plus samples of their newest blend. “I received the Grammys opportunity from my brother, American film and television director, Anthony Hemingway,” says Lucas. “He’s been able to create pivotal opportunities for me. The Grammys board of directors had to review our product and they had to approve it. So we were approved.”

The 2018 Academy Awards have also been locked down. SWL will be in the top 20 nominees’ gift boxes. And while they are giving away product, they are also securing the bag. “We’ve also been very successful with getting into places like Georgia Browns which is one of the top 10 restaurants in D.C. We are at Carolina Kitchen and just got placed in Acadiana,” says Lucas.

Raised in Wilson, North Carolina, Lucas attended UNC-Chapel Hill where she studied chemistry. After battling cancer at the age of 24 and then again at 27 resulting in a partial hysterectomy, Lucas knew she survived for a reason and she wanted to live a healthier life. She says that “other than making a ‘healthier’ alcoholic beverage, we are also a farm-to-table distillery. All of our fruit and juices come from local distributors and local farmers. We try to source everything locally first before going international for anything that we need. The glass that we use, they don’t make in the United States, so we had to go outside of the U.S. but everything else is here.”

Being a socially conscious company was important to Lucas. “The glass is German-imported. We don’t source our glass from China. We source it from Germany because of the human rights violations of China and the abuses. … Would we ever work with a company in  China? As long as we have full confidence that that company is paying a fair wage for a fair day’s work, right? We are never going to be a part of any entity that is unfair to mankind and our brother and our sister,” she says.

SWL also watches their carbon footprint. “We believe in the environment, in Mother Earth. We are also sustainable so we believe in the idea of choosing materials that don’t harm the Earth and that can also make sure that the Earth is in place for the next generation,” says Lucas.

As a Christian-based company, their commitment to giving back to the community isn’t surprising. “We tithe 10 percent back at a local level. What is sold in Atlanta goes to support local communities that support our products. Whatever is sold in D.C. goes to support local organizations in D.C. I believe that is the reason why God has blessed this company so much in such a short amount of time. We aren’t just trying to go out and make money. We are putting out products that we believe in and are giving back like we should,” says Lucas.

SWL will be launching “Wicked Hot Toddy,” which was created in honor of Lucas’ grandmother, Isadora, this winter. And the spirits industry is just the beginning. SWL is offering proprietary opportunities for restaurants, nightclubs and for anyone who wants to create their own beverage. They are working on creating a non-alcoholic company called Southern Good Food and Beverage and will be awarding a cash grand prize to the HBCU technology student who can build the best mobile app.

The advice Lucas gives African Americans interested in the spirit and beverage industry is, “to thine self be true. My favorite phrase: ‘Don’t compromise who you are in order to get to where you want to go.’ African American-owned companies have not had a national [or] international presence in the spirits business and I excited about the warm welcome I am receiving in this industry as the only African American female-owned moonshine distiller,” she says.