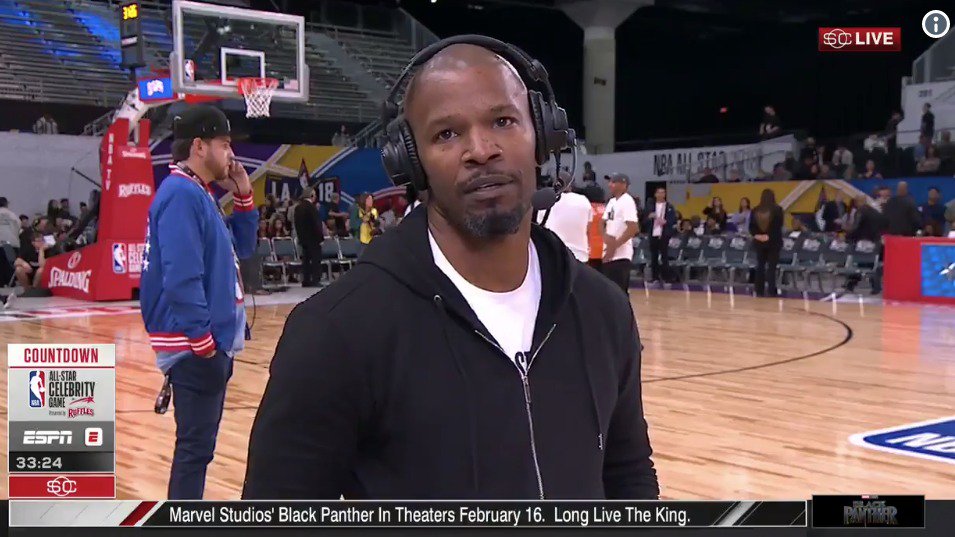 Actor-comedian Jamie Foxx is notoriously stingy about giving any information about his love life. And when you think about it, you can’t name a single female that he has dated that people know much about during his long career in Hollywood.

Foxx’s high level of privacy has not changed at all in recent years. Michael Smith of ESPN found this out the hard way during a cringe-worthy interview.

The light-hearted question-and-answer session was flowing along smoothly during the NBA All-Star Weekend Friday night. The Academy Award-winning actor (Ray) was preparing to play in the NBA All-Star Celebrity Game when, suddenly, the interview took a radically awkward turn.

Smith broached the topic of Foxx and his alleged girlfriend Katie Holmes playing basketball with one another on Valentine’s Day. The two have been rumored to be dating for years, ever since Holmes divorced ex-husband Tom Cruise. The rumor mill went into overdrive when Foxx and Holmes attended a movie awards program in Los Angeles recently.

But that doesn’t mean Foxx is ready to discuss the topic — at all.

“I know you’ve prepared and I saw pictures. Did you and Katie Holmes play basketball for Valentine’s Day? Like some real Love & Basketball?” Smith asked Foxx.

Without even hesitating, nor giving any indication that he was offended by the question, Foxx simply and casually removed his headphones and walked off the “SportsCenter” interview as it was going on live — without saying a word – leaving Smith reeling and squirming to try to recover from the rebuff.

“Uh oh, did we lose him?” Smith asked awkwardly as Foxx was seen beginning to prepare for the game on the court. Smith then tried quickly to mop up the mess with as much decorum as possible.

Check out the segment that will make you wince with embarrassment for Smith, as reported by DefPenSports’ Rob Lopez.

Guess Jamie Foxx had to go and couldn’t answer a question about playing basketball with Katie Holmes 😂😂😂 pic.twitter.com/XYq9fPHt3v