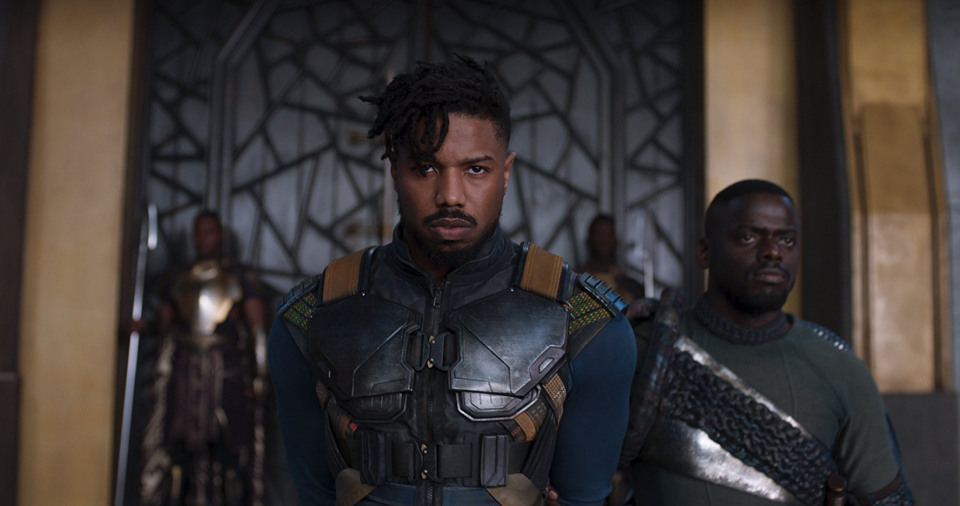 Michael B. Jordan as Erik Killmonger in Black Panther (Photo provided by Marvel)

There were so many underlying messages and anecdotes running through the entire two hours and fifteen minutes of Marvel’s Black Panther that it’s hard to keep up.  The boldest and perhaps most impactful lesson is seeing the effect of Michael B. Jordan’s character Erik Killmonger being separated from his history, his roots, his past. After his father’s unexpected death, Killmonger loses the connection to his family and his past and is left to adopt the culture and lifestyle from his American homeland.

While his cousin T’Challa grows up sheltered within the rich foundation of family and ancestral antiquity, Killmonger grows up in a strange land without connection to his history. The result is an inability to connect with others, an absence of pride and a resentment for his own people. Killmonger doesn’t value relationships because he hasn’t been taught to embrace their value in his life. He is driven by hate and resentment, two catalysts that provide adequate motivation for success but lack the ability to sustain. He clings to values like greed and war established by his adopted home. The movie Black Panther portrays Killmonger as a derelict fueled by revenge and hate. He despises the way people that look like him are oppressed, killed and humiliated in America but more importantly, the truth we never see him acknowledge is that he hates himself.

Watching Killmonger’s struggle for power was much like visiting any urban neighborhood filled with young Black men without hope. Unlike Wakanda, cities like Chicago are filled with young Black men robbed of their ancestry and pride, replaced with misplaced anger and resentment for a system that seeks to put them in chains or even worse annihilate them altogether. For those who have been able to find enlightenmen,t it’s easy to forget that many are not given that chance or sadly are unable to envision their own freedom. Killmonger’s spirit is present in the  2.3 million African American males that are imprisoned across the U.S., angry at a system that opted to keep them in chains as opposed to living and contributing to society.

The irony with Killmonger’s character is that although he claimed to want to kill the oppressors of Blacks in America, because he felt no connection to his homeland, he had no reservations killing other Wakandans, his family or even his girlfriend. Killmonger’s lack of apathy could be attributed to the fact that he lost the ability to relate when his father was murdered and he realized the murderer was his uncle. Today, many African American youths kill each other without a second thought because of the neighborhood they were raised in or the colors they vow to represent. Taking each other’s lives is a way of life because they were born with no connection, no understanding of who they are or where they come from. Ryan Coogler and Joe Robert Cole did a great job of detailing the dichotomy between a man supported by his history and heritage against one who has nothing but vengeance and pain. We see T’Challa comforted by the spirits of his ancestors, while Killmonger has nothing to stand on when faced with pain and adversity. Killmonger’s spirit is lost because it has no home, no attachment, no identity.

Watching the perils of Black America played out through a Marvel superhero movie was bittersweet. The movie broke numerous blockbuster records and while the cinematic artistry was superb, one can only hope some of the sales were due to the film’s attempt to educate and enlighten the Black community. Activist and civil rights attorney Derrick Bell once said, “Education leads to enlightenment. Enlightenment opens the way to empathy. Empathy foreshadows reform.” Although it’s unlikely that a movie will motivate a revolutionary way of thinking, it’s clear it’s a great start.