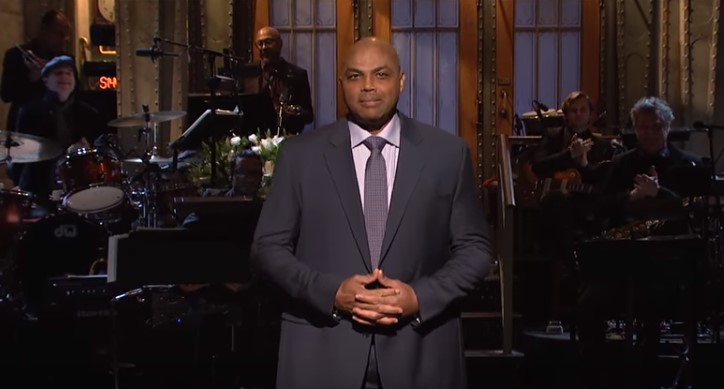 Barkley reminded the crowd that he has been “saying whatever the hell I want to for 30 years” and that his famous outspokenness has not negatively impacted his career nor revenue stream.

“I’m an athlete and athletes have been speaking a lot this year,” he said. “They’ve been kneeling during the anthem, refusing to go to the White House. A lot of times athletes are worried that speaking out will hurt their career. Here’s something that contradicts all of that: me.

“I’ve been saying whatever the hell I want for 30 years and I’m doing great. I’m hosting ‘SNL’ for the fourth time for no reason. Other than Lorne Michaels just wanted someone to talk to about Black Panther. But this country has a great tradition of athletes speaking their minds. Muhammad Ali changed the way people thought about Vietnam. Jim Brown had people thinking about race. Michael Jordan even thought it was OK for him to play with Looney Tunes.”

The Emmy Award-winning “NBA on TNT” analyst has managed to slip in a few jokes about James’ notoriously receding hairline even as he urged him to keep speaking up, adding that dribbling is only one of four things he does well. The others? “Shooting, passing and magically making his hairline come back.”

As for the secret of his own success, Barkley joked it was “because I have a great work ethic, I’m responsible and because when I was born I was 3 feet tall and weighed 26 pounds.”

The first-ballot Hall of Famer, 55, said athletes have to speak up because they are sometimes the only ones standing against inequality and injustices in some communities.

“At the end of the day, athletes are the only ones speaking out in their communities,” he said.

Barkley did just that back in December of 2017 when he very publicly campaigned against accused sexual abuser Roy Moore in Alabama. The former Auburn Tiger told the electorate in his home state that “at some point, we’ve got to stop looking like idiots to the nation [for supporting Moore in his failed Senate bid]. I love Alabama, but we’ve got to draw a line in the sand. We’re not a bunch of damn idiots.”

Barkley had parting advice for James, who has famously taken public stances by donning a hoodie after the Trayvon Martin murder; wearing an “I Can’t Breathe” T-shirt after a New York cop used a chokehold to kill Eric Garner in Staten Island, New York; and speaking out on race relations at the most recent ESPYs awards show.

“Keep on dribbling and don’t ever shut up,” Barkley implored James.

Barkley did not mention Ingraham’s name, referring to her as “this lady on Fox News.” Her comment arose after James and Kevin Durant took issue with President Trump with James saying the president doesn’t “give a f— about the people.” Ingraham called their comments “ignorant” and said: “You’re great players but no one voted for you. Millions elected Trump to be their coach. So keep the political commentary to yourself or, as someone once said, shut up and dribble.”

The blowback Ingraham received was so intense that she had to issue a statement, saying the “shut up and dribble” phrase was merely a take off her own past work and that she has used variations of the phrase for 15 years, including in her best-selling book.

“If pro athletes and entertainers want to freelance as political pundits, then they should not be surprised when they’re called out for insulting politicians,” she said in the statement. “There was no racial intent in my remarks; false, defamatory charges of racism are a transparent attempt to immunize entertainment and sports elites from scrutiny and criticism.”

Check out Barkley’s “SNL” monologue below: