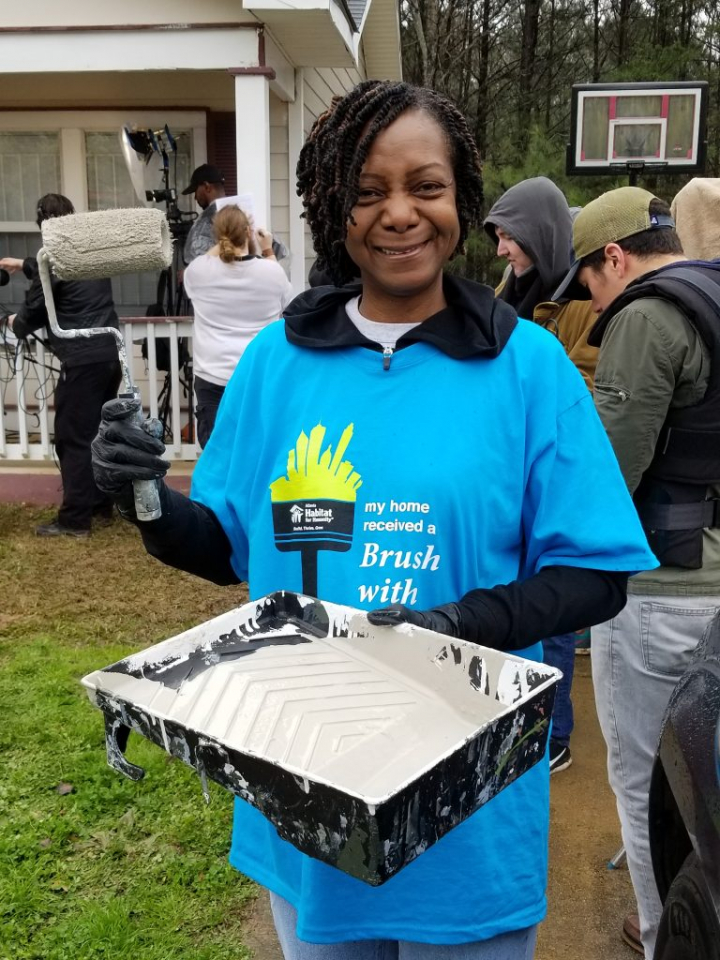 “I could not have [done] it without them, but it was really a blessing for them to come over. I mean they started coming early in the morning, and it was raining that day, so I didn’t think they were going to come. They actually came and did what they do,” says Catherine Chandler, an Atlanta Habitat homeowner.

On Feb. 28, students and faculty of The Art Institute of Atlanta met at Chandler’s residence to refresh the exterior appearance of her home and make some minor repairs.

The Brush with Kindness program is a critical repair program that provides exterior painting, cosmetic touchups, and other minor repairs for longstanding Atlanta Habitat homeowners who have a history of strong financial stewardship.

The collaboration is the latest part of The Art Institute of Atlanta’s “be the exception” initiative. The college is now nonprofit and owned by Dream Center Education Holdings, whose mission is “to connect people and resources by providing an environment where a purposeful and affordable education is the key to transforming lives,” which closely aligns with the mission of The Art Institute of Atlanta.

Catherine has been an Atlanta Habitat homeowner since 1999 and is an employee at Columbia Residential, where she assists elderly and disabled residents.

Before becoming a homeowner nearly a decade ago, Chandler was renting to buy.

What was that experience like when you bought your home? Do you remember it?

Where did you grow up?

You’re in an area that has experienced a lot of gentrification over the past few years.

Yes, yes it has. Well sort of, sort of. I worked for the Atlanta Housing Authority. So we had a lot of public housing kind of over that way that has gone down. It’s really just land right now. I don’t know what they’re going to actually do with the land, but that’s an area where I also raised my kids, pretty much. So the home is not far from where I actually worked at one time in public housing.

You’re watching the community change. What is it like for you to see that?

Well, you know what, it’s not a bad thing. I think the area is trying to turn to be a little better. You have a lot of homeowners that are coming in now. … [There were] a lot of apartments and now they’ve built the homes. So they’re bringing the area to be a different area — sort of better because the kids there are learning how to live in a home, as opposed to just staying in an apartment — something that’s actually going to be theirs one day. So, it’s a blessing.

What would you say to someone who’s interested in the program?

I would say that if you’re interested in buying a home — Atlanta Habitat is a very good way to start to buy your home because it’s going to be something that’s a very good experience for you. It’s not hard to do. I pretty much just put in an application, and I had to make some life changes as far as learning how to save some money to put some money back so that I would have money to pay for my down payment (which was not a whole lot of money back during that time). Just prepare your mindset to want to do better–want to have something better for your kids and for yourself.

What would you say about the Brush with Kindness program?

It just made me feel so special to know that it’s a program like that, that’s out here. I didn’t know [there were] programs there to help homeowners because sometimes you might have some financial problems. You might not be able to just buy the paint and everything or have people to actually come and help you paint.