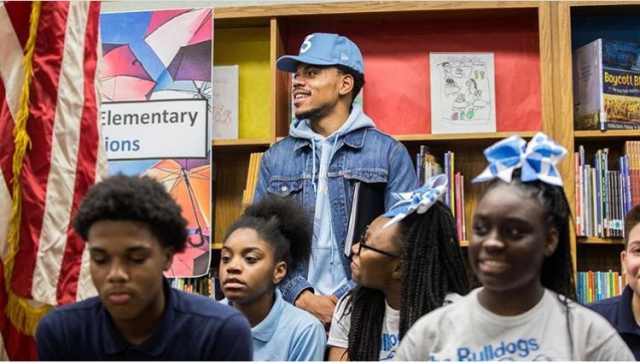 Chance The Rapper is known for his philanthropic work, especially in Chicago. So it was no surprise when the native interviewed with Adrienne Samuels Gibbs at the Museum of Contemporary Art in Chicago, expressing his feelings regarding the decision to close and integrate several public Chicago South Side high schools.

The three-time Grammy Award winner has raised $2.2M to help schools in the city and donated his own money, $1M, to the cause to create social change.

On his thoughts on the city’s public school system, he said, “I kind of went hard for CPS for a long time.”

The activist and artist blamed members of his local government for not helping fix the issues in Chicago’s public school system. He called out Mayor Rahm Emanuel and others in office for their poor work ethic regarding the issue.

Chance The Rapper believes that real change will occur if neighborhoods unite (instead of dividing) for a cause that can benefit students.

“It starts in my neighborhood, my ward, my block type s—,” he said.

Hopefully, the rapper gets a chance to see a change in Chicago’s public school system for the sake and betterment of students’ education.