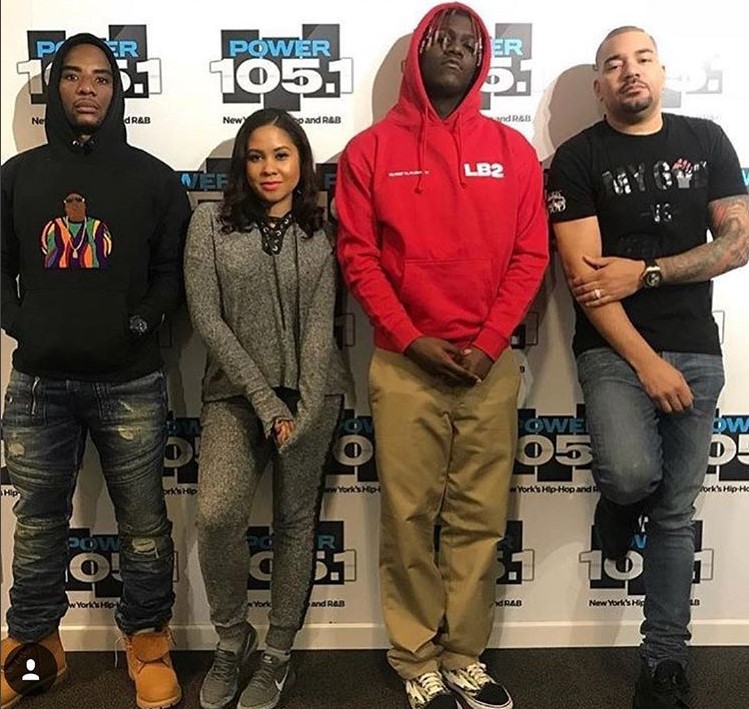 DJ Envy is getting serious grief from social media after he got up and walked off the set of “The Breakfast Club” without saying anything to his co-stars, nor guest comedians Desus and Mero, after Envy felt the comedy pair had disrespected him and his wife.

During Desus and Mero’s own comedy show, they insinuated jokingly that DJ Envy’s wife was only with him “for the check.”

Comedy duo Desus Nice and The Kid Mero have accrued a loyal national following with their “Bodega Boys” podcast, and now the Bronx-bred buddies bring their brand of comedy to TV on Viceland’s first daily, late-night show.

DJ Envy, born Raashaun Casey, 40, angrily confronted Desus and Mero on “The Breakfast Club” by telling the pair that they had flagrantly crossed the line by mentioning DJ Envy’s wife in any capacity.

“We’re going to start off like this,” DJ Envy spat out at Desus and Mero.”You owe me an apology.”

“You can joke about me all day long. But you don’t talk about my wife and my wife, that’s a little disrespectful,” Envy barked at the two.

When the situation settled, and DJ Envy was still not satisfied with Desus and Mero’s apology, Envy got up quietly and walked out of the studio without informing his co-stars of the “Breakfast Club,” Charlamagne tha God and Angela Yee. Take a look:

Twitter ripped DJ Envy apart, like a bleeding zebra at a lion convention, for getting all into his feelings on live national radio — and after he received an apology from Desus and Mero, to boot. Fans of the show believe DJ Envy, who has uttered inappropriate jokes on the regular since becoming a star disc jockey, was being far too sensitive and hypocritical, and commenced to slamming Envy full throttle.

Take a look at the responses to DJ Envy walking off the set:

Dj envy wasn’t wrong…. what really happened was his wife felt some type of way and he knew he had to say something or sleep on that couch

DJ Envy needs to be fired that nigga walked off the damn job. Light skin ass nigga, grow some balls. This your job son. @djenvy

Dj Envy don’t want nobody making jokes about his wife but had no problem publicly cheating on her and let Erica go at her neck. If you want people to respect your family, YOU need to respect them first.

I could use a laugh this early 😂

LMAO DJ Envy after he got mad and walked out #TheBreakfastClub pic.twitter.com/srXJFKCHXz

I understand Dj Envy standing up for his wife but why did he leave the interview ??? Desus and Mero I hope y’all go back to #TheBreakfastClub after this tho we need part 2 👏🏾👏🏾👏🏾 pic.twitter.com/A2RoXqt1gr

Oh lord this Desus and Mero interview on #TheBreakfastClub
Dj Envy don’t play when it comes to his wife and kid’s Lord 😲 pic.twitter.com/F8no9n5m48

live footage from DJ Envy running out the studio!! pic.twitter.com/y9EB8XsI2d

Dj Envy is a fucking crybaby!! Now I wonder if Dave or Chris Rock joked on him would he come at them like he tried with desus and mero.