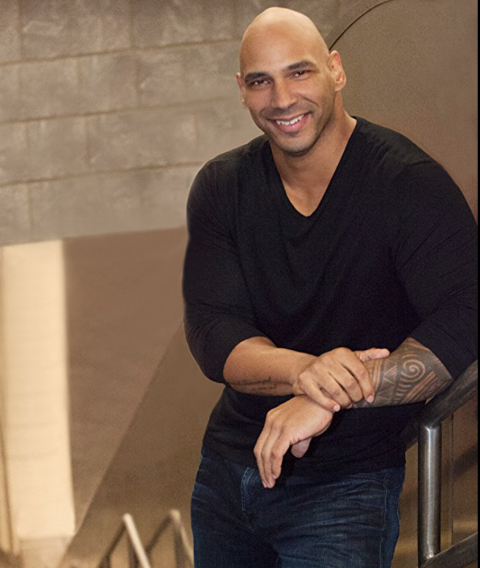 Jeremiah Clarke has had an interesting life leading up to his decision to pursue acting as a full-time career. He grew up Neptune Township, New Jersey, and took a stab at playing professional football before being injured; he went on to become the youngest policeman to make sergeant on the force in the history of his hometown before his career ended again because of an injury. With football and law enforcement out of the picture, he finally began to pursue his childhood dream of acting.

Clarke attended classes at The Barrow Group in NYC then shortly afterward, he was cast in an HBO student film. After spotting Clarke in an Odell Beckham Jr. commercial and then in an episode on the popular television show “Gotham” recently, rolling out got a chance to catch up with Clarke for a one-on-one interview.

At what age did you catch the acting bug?

It was around the age of 12. I grew up a very shy kid without many friends. So I began entertaining myself in front of my bedroom mirror acting out scenes from my favorite movies or stand-up comedy shows. One day I began telling some jokes and saw the response, which was a lot of laughs, and it felt like a sign that I was meant to entertain people to take them away from their everyday stress and I haven’t looked back entirely since.

What advice would you give to new actors about entering this business?

To follow their dreams but with a plan. I’ve learned that everyone’s journey in the entertainment industry is unique. What works for one person may not work for you. So it’s a matter of soaking up all the knowledge you can about the “business.” Look at the successful people [and] take bits of what they’ve done along their journey and put your own spin on it. Most important, you have to trust the process and not rush it. When it’s your time to succeed it will definitely come.

How do you feel about the #MeToo movement and have you ever witnessed “acting couch” harassment when it came to auditioning?

In my opinion, the #MeToo Movement has been one of the greatest accomplishments. I’ve not witnessed it myself but can say personally, I’ve been a victim to lots of bad circumstances in my younger years of life that I stand up and stand side by side those who are in need. So many issues and terrible acts against others continue when we don’t have a voice. The #MeToo Movement has brought not only a voice to survivors of sexual abuse but also holding those who did it accountable.

Who would be your dream person to work with if you could make a list of the top five actors you want to work with?

My dream person to work with would be Denzel Washington mainly because I feel from in front of the camera, to directing and off camera he would compel me to bring my best every day on set or just having a conversation with him. One day I’d love to work with Will Smith, Gabrielle Union, Sandra Bullock and most definitely Dwayne “The Rock” Johnson.

Which do you love most — acting or modeling and why?

My heart and passion is and always will be with acting. I love the fact a gift I’ve been blessed with can be used to entertain people, make them laugh, cry and even not like me. Life can be so stressful and I know once a person turns on that television, they want that escape. For me, I prefer that I be on the side of giving the escape.

Follow @_jeremiahclarke on social media and check out the photo gallery after the break.