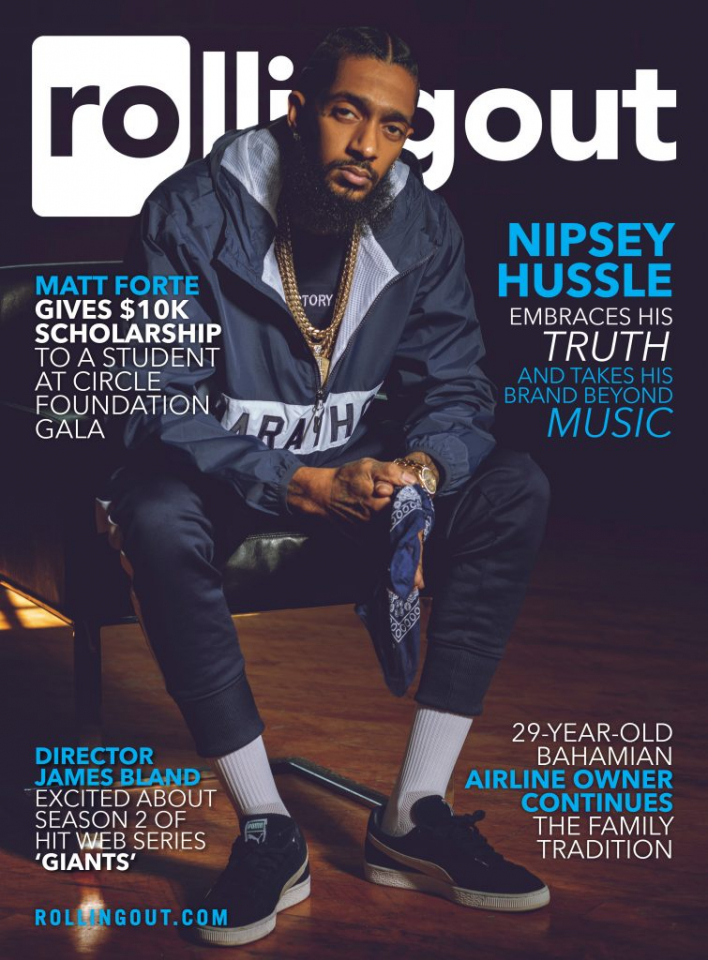 While reclining in a seat at his newly opened STEM center in South Los Angeles, Vector 90, Nipsey Hussle gripped a blue bandanna that was wrapped tightly around the knuckles on his left hand. He expressed how cities, streets, and neighborhoods often serve as protagonists in hip-hop. Beyond the rhymes, beats, and showmanship, an artist’s backstory often plays an intricate role in how they are perceived by the masses.

Before an artist ever puts pen to pad or creates a freestyle rhyme, their environment usually inspires the plot.

Nipsey’s first-person narrative often centers around his experiences on blocks such as Crenshaw Boulevard, Slauson Avenue and 60th Street.

“I used what people knew about the environment to give my story context,” Nipsey Hussle shared. “We had so much coverage [of] gang culture before my generation. You had movies [like] Boyz N the Hood and Menace II Society. You had the L.A. riots. So I think I use that mainstream understanding of South Central L.A. to bring people into my personal experience in that environment. Hip-hop started as something that took place in the streets and came from the inner city. I think it’s rooted in struggle and community— we want to know where you came from. Public Enemy said hip-hop is the CNN for the streets. And so by me being from L.A., I learned about [the] South by listening to Scarface, Cash Money and No Limit. I learned about the East Coast by listening to Nas, Jay [Jay-Z], and Biggie. And then I’m sure that they learned about L.A. culture by listening to Dr. Dre, Eazy E and Snoop. And after that, Kendrick, YG and Nip Hussle. There are other artists who speak for the environment. I think [there is] a curiosity about the context of the story.”

For decades, South Los Angeles served as the epicenter for Black culture on the West Coast. It’s an area that has produced a slew of prominent individuals such as Maxine Waters, Russell Westbrook, Ice Cube and Tiffany Haddish.

But gang culture is also a reality for many in South Los Angeles. Nipsey, who often expresses his thoughts on gang life through lyrics, has witnessed artists and corporations profit from gang culture. In February, Reebook shared images of a blue shoe that featured “Rich Rollin’” on the back. “Rich Rollin” is a reference to the Rollin’ 60s Crips. The shoe release was viewed as a blatant form of disrespect to those who lost their lives or family members to gang violence.

“I’m a voice from that community, so it’s only right that I speak on what’s right and what’s wrong,” Nipsey says. “How much money are you putting on these people [who are in jail] books? How many funerals [did] you pay for? How many mommas [did] you console when their son is in that casket and they breaking down crying? You can’t stick your toe in this thing. It’s all or nothing. And that pressure was put on young people in the communities where the cultures are the reality from day one. It’s a stingy culture. You can’t be halfway in, halfway out. You got shoe companies, artists and journalists that appropriate or play with the culture. I’m just speaking on right and wrong. We’re not going for that. If this was [street] life, there would be consequences behind playing with that s—. If you asked somebody where they were from and they told you a gang that they really wasn’t from, they could die. You could get beat half to death or worse just because it’s a violation to the ones that are serious about this. I think that it’s a level of opportunism. People see that it’s a worldwide fascination, worldwide interest about it. I look at it like colonialism. You went to Africa and you took all these diamonds and you set up mines in these countries. And now you’re cutting hands off from the people that are from this land. Put a diamond in their pocket. We can’t let hip-hop get like that. We can’t let you do this to the street culture.” 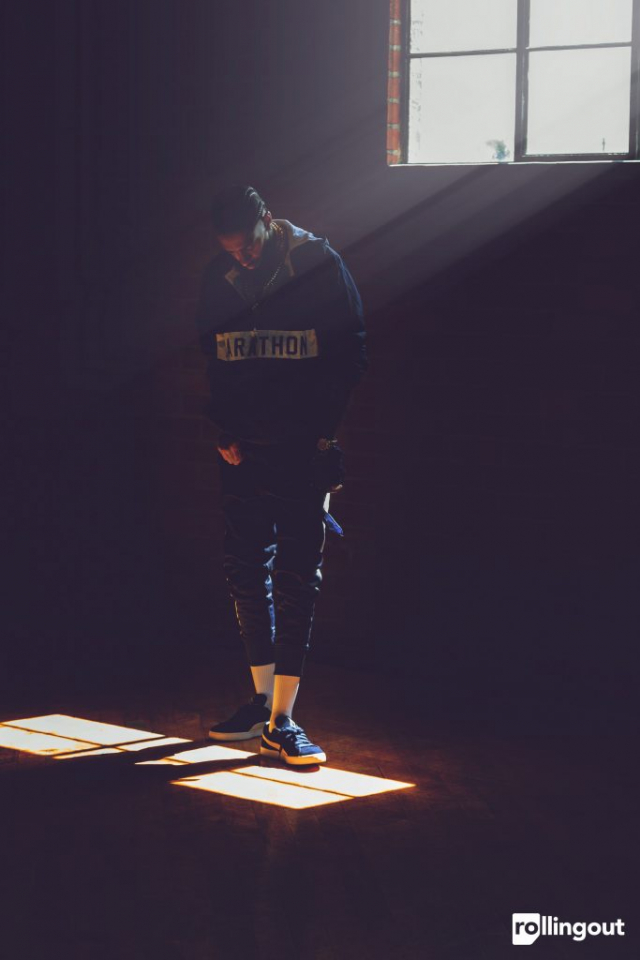 While some corporations and misinformed artists are attempting to capitalize off street culture, Nipsey is seeking to provide another outlet for those who feel trapped by gang life, poverty, and a lack of education.

Nipsey teamed up with real estate investor David Gross to open Vector 90 and provide an outlet for people in the community to be educated in the fields of science, technology, engineering and mathematics (STEM).

“The majority of my peers who grew up in gang culture are doing time, they got caught via technology,” Nipsey shared. “Technology is working against the streets. And it’s changing the whole reality of what can take place on the streets. I was at an age where I could perceive the world before the internet and computers. I was a part of that generation, so I saw what happened. I saw the opportunities that were created … I’m from the era of bootlegging. You could buy a CD burner and start a whole enterprise. I delivered my whole original product from a burnt DVD piece of hardware. I became Nipsey Hussle because I could burn my own CDs and sell them from the trunk of my car. You used to have to go to a big studio to record. Now you don’t have to sign a deal to get into the studio … We have to be in tech as hip-hop artists and people from the streets. We can’t just be surrounded by tech, addicted to tech — YouTube, Facebook, Twitter, Instagram — but not involved in tech. I think that is where we have to go.”

Nipsey remains steps ahead of most of his peers when it comes to using unconventional methods to sell and promote his music. At a time when most artists struggled to sell music, Nipsey took an outside approach by selling his 2013 Crenshaw mixtape for $100 per hard copy. He grossed over $100K from the project. In a nod to Nipsey’s unconventional approach to marketing the project, Jay-Z responded by purchasing 100 copies at $100 each.

After years of being an independent artist, Nipsey signed a partnership with Atlantic Records prior to the release of the critically-acclaimed Victory Lap.

“[There are] levels to the title,” Nipsey said. “On one hand, there’s a music victory just from a purely music level. I’m not competing with the handicaps that I was competing with before. I was on probation the first seven years of my career. I couldn’t really travel as much as I wanted to. I didn’t understand the business as well. I didn’t have the most favorable business arrangements. I wasn’t in a position of having an experience to where I had the confidence to really execute my full belief … I was able to become my own boss, as an artist. I established my own label, my own studio, and created a level of independence. I have my own touring business, my own clothing and apparel line. So that’s one of the victories that that title speaks to. Also being somebody that didn’t have no family in the music industry. I didn’t have no connects to the music industry. I didn’t have no platinum artists that believed in me. I really bought my own equipment, burnt my CDs, sold them out my trunk in L.A. in the middle of gang wars and somehow ended up in the seat I’m in. That’s a victory. Being counted out at times. Having setbacks in my career, having moments where it looked like I didn’t achieve or live up to potential. And then having moments like [albums] Crenshaw or Victory Lap, I knew that after my last couple of releases that Victory Lap was going to be an elevation and represent me moving into a different space.”

Nipsey won because he’s an artist who hustled his way into the West Coast rap elite without asking for or receiving a co-sign. He sold independent CDs, Crenshaw-inspired paraphernalia, and opened clothing stores to brand himself beyond music. And more importantly, he’s always embraced his truth.

“I use feedback to gauge how close and how connected I am to the world,” Nipsey revealed. “But when you start gauging what other people want from you, you lose a little bit of the integrity of the art. I think the best way to make powerful art and music is to be aware of your opinion and confident in what you like. If you love the album, it don’t matter if it flops and doesn’t sell a unit and nobody responds to it. If you really love it, it’s cool. It must mean that people [are] off of what you’re doing right now, but when you step away from what you love and try to meet the people where they’re at, I think that you lose. I do understand it’s a balance between making art for yourself and then making something that could be consumed on that level. But I believe that the most effective way is to be honest about what you like. Rap on the beats that you are really inspired by. Say the words that are really true to you.”