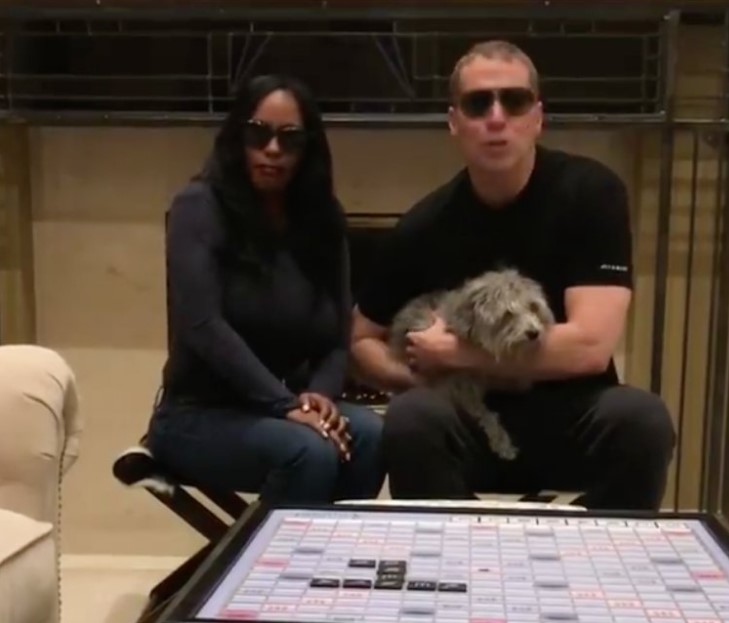 Gary Owen created some heat for himself when he used his Black wife to call Michael Blackson the N-word after Blackson dared Owen to say the taboo word himself.

Owen and Blackson have been volleying insults back and forth for the past month and some change. It all started when Owen, who was a guest on “The Breakfast Club,” said Blackson was not very skilled at his craft.

Blackson, 45, unloaded back on Owen, calling the Caucasian comedian a “wet dog” and dared Owen to utter the N-word publicly.

Unbeknownst to Blackson, Owen, 43, had a joke ready for him. Owen, who has been married to a Black woman for 15 years — and they have three children together — released a video where he sat next to his wife Kenya and let her call Blackson the N-word on his behalf.

“Michael Blackson, I saw your little weak comeback where you say I smell like a wet dog,” Owen said as he held a dog close to his lips. “Yeah I kissed her. White guy stuff … You said I won’t say the n-word back to you. You dared me. I don’t gotta say it back, my lady will say it for me.”

Social media users had very mixed reactions to the clip. Several said this little stunt confirmed what they have already thought about the comedian, that he is indeed a racist. Still others are slamming his “traitor” wife.

“Yeah we should be fine with the fact that you would use your Black wife to use such a racially demeaning and derogatory term to address another Black person,” wrote Twitter user Litha Mjonono. “[It] says a lot about you.”

Another online comment read: “Gary Owen went after Monique and now Michael Blackson. The slave master is still in the big house with a bed wench and talking down on the field slaves. To hell with Gary Owen.”

Gary Owen has been saying wild racist stuff about black people for the longest.

And then using his black wife as a shield to justfy it.

And black Americans stay giving him a pass. 🤮

The part that is sick about Gary owen’s video is his black wife calling another black man a Nigga because her white husband told her to since he “can’t”. After everything we have been thru under white supremacy…that shit will never be okay or get a pass from me! Period.

Those on the other side of this argument do not believe Owen committed any cultural crime. They don’t have a problem whatsoever with Owen commissioning his wife to use the N-word because they don’t think Owen is racist nor a cultural appropriator like Miley Cyrus, Justin Timberlake and Justin Bieber.

“Woke Twitter really be on that bullsh–,” one Black woman wrote. “So now Gary Owen is a cultural appropriator? Just say y’all hate everybody that’s not Black and be done with it, ‘cause I’m sick.”

Another user said: “You married a black woman, built a beautiful home with her, and had kids with her. You even treat her son as your own child and used your career to pay for his college tuition. You’re not a racist…these people just wanna create unnecessary controversy.”

After watching a few rounds of the argument erupt around him on if Owen is a racist, the comedian himself responded to the online debate. He claims he received more laughs than backlash:

You can. Most ppl are laughing it’s just a few ppl making the most noise. But comics are going away anytime soon. We still going to be talking shit that’s what ppl want. https://t.co/0FR4wD7Xmv

That’s really what it is. Fake woke. Gotta go time to let my nuts hang. https://t.co/PTLeFlE5UP

What do you think of what Owen did? Do you believe Owen is similar to Michael Rapaport (Higher Learning) whom most Blacks believe is an undercover racist? Or are you of the belief that Owen committed no cultural infraction and was just being a comedian?