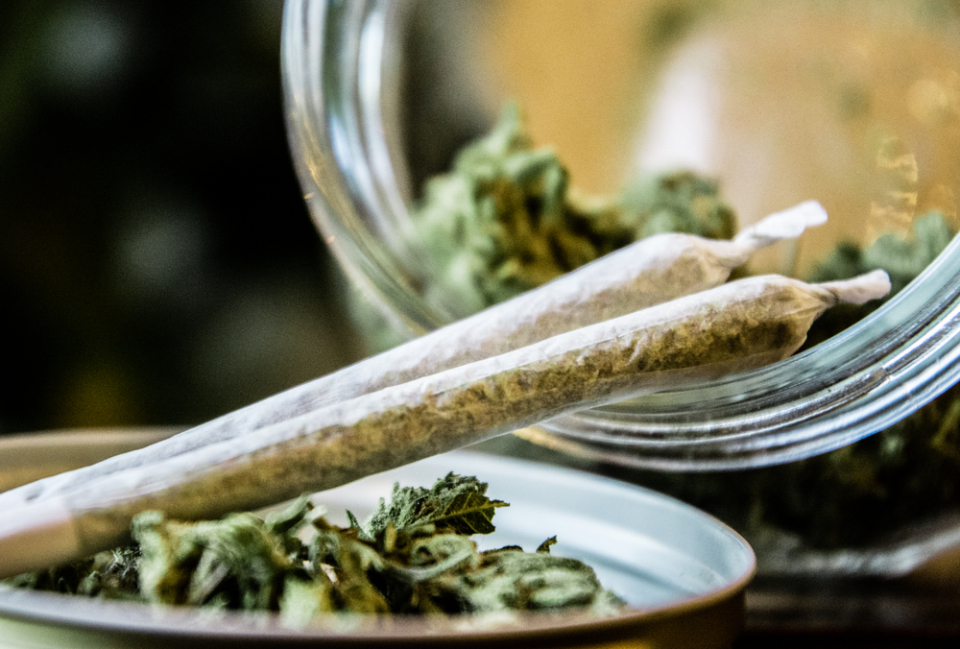 Marijuana Joints Next to a Jar (Photo Credit:   Mitch M/Shutterstock.com))

420 Day is here and many people around the country are getting ready to smoke, vape and eat marijuana in its many forms. Now that California, Oregon, Colorado and other states have some form of marijuana legalization, there are a lot of choices of strains of the plant to enjoy. Here are some of the most popular marijuana strains according to the staff at Cobra Extracts, a company that specializes in cannabis oil for vaping.

Lemon Skunk (hybrid) – Lemon Skunk was conceived from two separate Skunk phenotypes that displayed exceptionally zesty lemon traits. The skunky, citrus flavor draws you in immediately, and the happy, energetic buzz will shake you out of any funk. DNA Genetics developed Lemon Skunk as a great strain for combating depression and stress.

Bubba Kush (Indica) – An Indica strain that gained notoriety in the U.S. and beyond for its heavy tranquilizing effects. Sweet hashish flavors with subtle notes of chocolate and coffee come through on the exhale, delighting the palate as powerful relaxation takes over. From head to toe, muscles ease with heaviness as dreamy euphoria blankets the mind, crushing stress while coercing happy moods.

Fire OG (Hybrid) – Known for being one of the strongest of the OG strains, Fire OG has a strong scent similar to Lemon Pledge and an effect that can last up to three hours.

Northern Lights (Indica) – Psychoactive effects settle in firmly throughout the body, relaxing muscles and pacifying the mind in dreamy euphoria. Comfortable laziness allows patients to relieve pain and sleeplessness, while its mellow contentment roots out depression and stress.

OG Kush (Hybrid) – OG Kush is cherished for its ability to crush stress under the weight of its heavy euphoria. It carries an earthy pine and sour lemon scent with woody undertones, an aroma that has become the signature of OG Kush varieties and descendants. With OG Kush, patients most commonly cite improvements in migraines, ADD/ADHD, and stress disorders.

Tangie (Sativa) – Tangie is another fantastic offering from DNA Genetics in Amsterdam that has quickly gained popularity in its home and is spreading elsewhere. This strain is a remake of sorts of the popular version of Tangerine Dream that was sought-after in the 1990s. The genetics of this strain are a cross of California Orange and a Skunk hybrid, and its citrus heritage is the most evident in its refreshing tangerine aroma.

Jack Herer (Sativa) – Jack Herer is a sativa-dominant cannabis strain that has gained as much renown as its namesake, the marijuana activist and author of The Emperor Wears No Clothes.

Tahoe OG (Hybrid) – Tahoe OG is the perfect rainy day strain. Strong and fast-acting, you may not want to use this strain when you’re planning to leave the house. Great for those suffering from insomnia, pain, or lack of appetite, Tahoe OG has made a name for itself among other indicas. A top nighttime strain, it provides an extremely lazy, heavy body sensation.

Train Wreck (Hybrid) – Train Wreck begins its speedy hurtle through the mind with a surge of euphoria, awakening creativity and happiness. Migraines, pain, and arthritis are mowed down by Trainwreck’s high THC content, and many patients also use it for relief of anxiety, ADD/ADHD, and PTSD.

Grand Daddy Purple (Indica) – GDP’s potent psychoactive effects are clearly detectable in both mind and body, delivering a fusion of cerebral euphoria and physical relaxation. While your thoughts may float in a dreamy buzz, your body is more likely to find itself fixed in one spot for the duration of GDP’s effects. Like most heavy indica varieties, Granddaddy Purple is typically pulled off the shelf to treat pain, stress, insomnia, appetite loss, and muscle spasms.

Skywalker (Indica) – Skywalker is a well-rounded indica-dominant hybrid that helps patients knock out pain and relax into sleep after a long day of battling the Dark Side. The sativa side of this strain allows for a nice head high as well, but it isn’t overly hazy or unfocused.

Platinum OG (Indica) – A brief, heady onset settles into a powerful physical sedation suitable for nighttime use and pain, stress, or anxiety relief, making this precious strain a robust healer.

Romulan (Indica) – A brief, heady onset settles into a powerful physical sedation suitable for nighttime use and pain, stress, or anxiety relief, making this precious strain a robust healer.