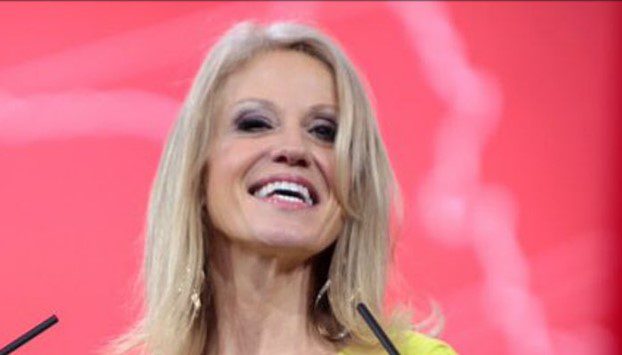 For those of you who need a laugh on a dreary Monday morning, here is a joke for you that was not intended be one.

White House senior advisor Kellyanne Conway actually opened the aperture in her face and discharged nonsense into the atmosphere, telling the media that Melania Trump is a “such a superior” first lady to Michelle Obama and the country is lucky to have her.

Yes, ladies and gents, those are the words Conway used with a straight face and without blinking. She’s good.

TMZ chased down the White House whisperer in Washington and asked about media reports that Melania Trump has not been featured on the cover of any U.S. magazines, while her predecessor Michelle Obama appeared on at least two dozen during her eight years with Barack Obama in the White House.

“Melania Trump is such a superior and excellent first lady,” Kellyanne said to the entertainment gossip publication. “This country is so lucky to have her at its first lady.”

Conway proceeded to run down the list of Melania Trump’s activities and achievements, telling TMZ that the first lady is a wonderful role model for women and girls.

“Her work with youth … you saw her in the East Wing talking about the opioid crisis, empowering young kids and their curriculum in the schools, she is just doing a wonderful job. Everyone is just so excited that she and [her colleague] are in charge of the State Dinner …

“They see that everytime that they witness her going down for Hurricane Recovery … she is a philanthropist. She is a wonderful role model for women and girls — and really for anyone, anywhere.

“I don’t think she needs to be on the cover of a magazine for everyone to see how wonderful her work is.”

As you can see from her own words, Conway stumbled and fumbled through her robotic, rehearsed delivery of what makes Melania Trump a great first lady.

What do you think about Conway’s sentiments? Do you believe that Melania Trump is superior to Michelle Obama?