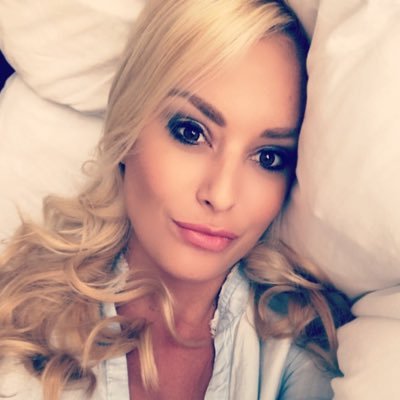 People are waking up Monday morning to the news that a former White employee at ESPN actually proferred the dubious claim that she was demoted at the predominantly White sports news network because she is White.

Talk about a paradox.

Britt McHenry, the ultra-conservative reporter who recently said all the NFL players who kneel during the national anthem should be banned from the sport, has claimed on Twitter that she was laid off because she was “white” and “made too much.” 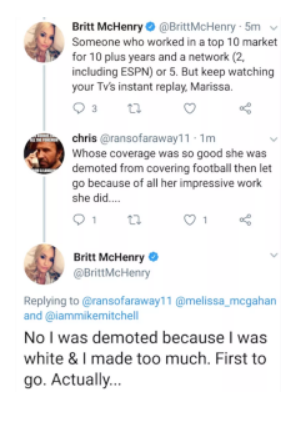 Laughably and predictably, McHenry has since deleted the absurd tweets out of shame, and probably after reading them aloud to herself and found that it failed the logic test. The McHenry Twitter rant was made in response to criticisms from the Twitterverse on her skill set.

She couldn’t delete them fast enough, however. Her words were screen captured by other users.

Makes perfect sense that the hot lava-spewing McHenry would be cast off the mainstream and conveniently find herself toiling for Fox News as the host of “Like It Or Not” on WTTG Fox 5 in Washington, D.C. She was among the hundreds who were laid off by the sports behemoth ESPN network in one of its first rounds of cost-cutting.

McHenry broached the topic of her dismissal on Twitter after being mocked by users about being dropped from NFL coverage. When she got the pink slip from ESPN in 2017, she said her ouster was due to her conservative views.

She tried to walk back her statements during an interview with Deadspin as McHenry said, “I think there were a number of factors into laying me off.”

However, McHenry warned she is exploring the possibility of explaining her firing in a forthcoming book.

“Trust me, I wouldn’t make a claim without proof. One day in a book. One day soon,” she told Deadspin.

Former colleague Jemele Hill, who remains at ESPN despite being suspended for making a series of very controversial remarks — even the White House begged ESPN to terminate Hill after she called Donald Trump a White supremacist — sent a tweet scoffing at the McHenry remarks.

You can also see within Hill’s tweet about how McHenry used her White race as an excuse for her ouster from ESPN before she hastily erased them from her Twitter account.