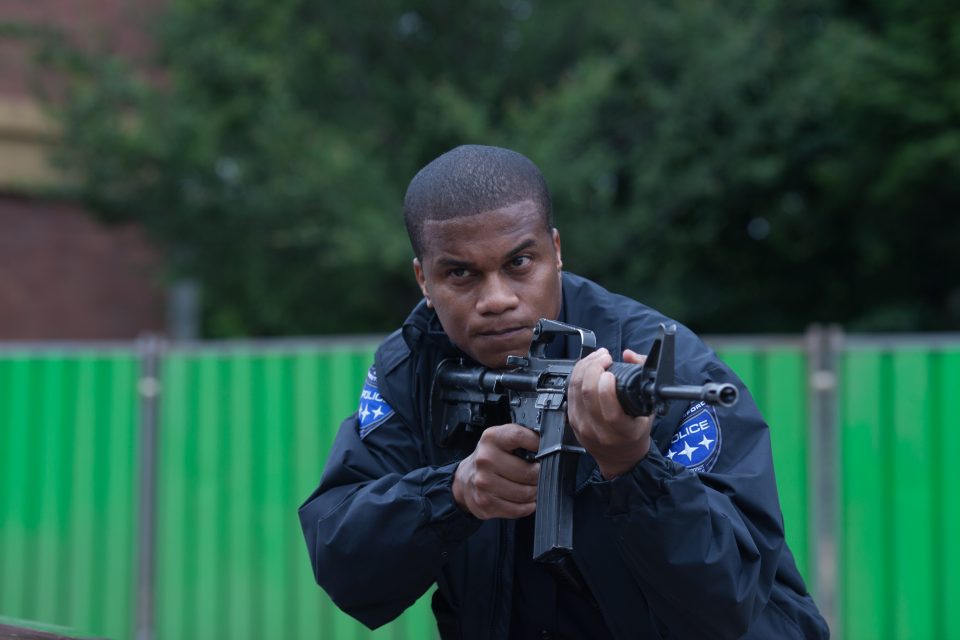 Chicago native Cory Hardrict is a veteran actor and a producer. With 25 years of experience under his belt, he has starred in films like American Sniper, Warm Bodies, and Battle Los Angeles. Hardrict is married to equally famous twin Tia Mowry and just welcomed his second baby with her. He is now starring in the new action thriller 211 with Nicolas Cage (Officer Chadler), playing Officer Hanson. The film was inspired by a real bank robbery that happened in Los Angeles in 1997 referred to as the Battle of North Hollywood. It hit theaters on Friday, June 8, 2018. Here, Hardrict shares insight into the new film and some advice for aspiring actors.

When asked about preparation for this film, he shared that his love for watching the action on TV and other roles helped him prepare for this role.

“I play a cop on a TV show now called the ‘The Oath.’ In all my prior work, I’ve played a lot of cop films and military films … I learned to carry that into this film, as well,” he said, adding that it was his goal to keep his character authentic.

We discussed life on the set of an action-packed film like this.

He said, “There was a lot of action, running, combat, so it was a really intense set, but at the same time it was safe and pretty cool.”

When it comes to guidance on the industry, Hardrict shared that he doesn’t have any personal mentors but that he always does his research on actors. He admits that Denzel Washington is his secret mentor; he admires the man and his work: “I love the way he handles his career and goes about his life and family. He takes his craft very seriously and the roles he chooses.”

Aside from promoting his upcoming film, 211, he is currently working on two other projects. He revealed, “I go back to filming the second season of my show ‘The Oath’ on Crackle. I have a film that I’m shooting this fall called The Outpost with Orlando Bloom and Scott Eastwood in Morocco. I have a film coming out called City of Lies with Johnny Depp and Forrest Whitaker in September. So work is going for me and I’m really grateful.”

Hardrict explains he sometimes feels like he’s still new on the scene despite his 25 years of experience. Working hard and taking your craft seriously were things that he asserted. He puts to rest the idea that acting and being in movies is a glamorous lifestyle that will be free of struggles. He closed, “Never stop believing in yourself and continue to work hard because nothing happens overnight … so keep grinding and have a lot of faith.”