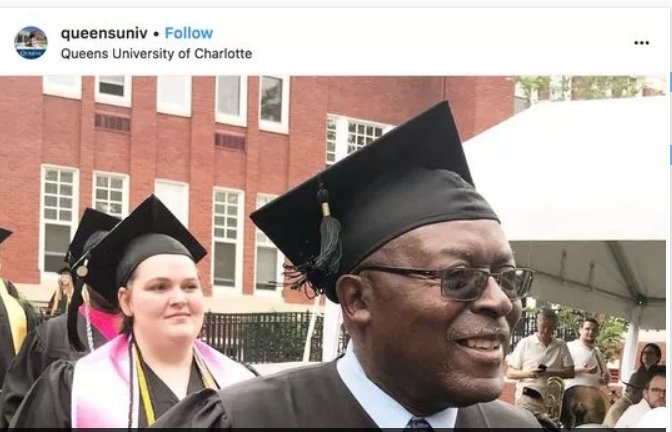 Freddie Sherrill spent most of his 65 years on Earth either illiterate, homeless, drug-addicted, imprisoned, or a toxic combination of all the above, and he was a serious candidate for suicide.

Sherill was the prototypical person to wind up a stereotypical statistic. He was a school dropout by age 8, locked behind bars by age 16, became homeless at 27 and was addicted to alcohol and drugs.

And, according to North Carolina’s WBTV, Sherill become trapped in a downward spiral and attempted suicide years later. Decades of recovery, determination and support has culminated with a bachelor’s degree from Charlotte, North Carolina’s, Queens University.

“Finally, today I can say that I’m a productive member of society,” Sherrill told the television station. “I haven’t arrived, you know. That’s just part of the journey, and the journey continues on.”

Sherrill was undeterred by the obstacles and the haters.

Sherrill was reared without ever knowing his father, according to the Charlotte Observer. With no parental guidance to speak of, Sherrill was easily preyed upon and preyed on others as he began a career of purse-snatching and car thievery that was punctuated by prison time at age 16.

That period of criminality also commenced a sad chapter of two decades of drug and alcohol abuse that left him homeless, the newspaper reported, with Sherrill ultimately smashing store windows on cold nights so that he could warm up in a jail.

Things got to be so pathetic that Sherrill once tried drinking liquor after he spilled it on the ground. One day in 1988, he used his last coins to buy a bottle of wine, but his hands were so shaky, he dropped it and it shattered on the ground.

“I was crying, and I was trying to get a drink off the broken glass,” The Washington Post reports.

Sherrill could do nothing right in life. He couldn’t even kill himself with a loaded pistol. And he tried in December of 1988. But, thankfully, the gun wouldn’t go off until he threw it onto the ground.

“I wanted to die and couldn’t even do that,” he told the Observer.

But when the gun did not go off as he intended it, Sherrill took that as a positive sign. Besides, “I was tired of hurting the people around me,” he told the Washington Post.

After staying at a halfway house in Morganton, North Carolina, Sherrill began doing yard work for a couple who introduced him to their pastor, Steve Eason, formerly of the town’s First Presbyterian Church.

The pastor was inspired to gamble on Sherrill on a hunch and hired him to work as a groundskeeper. Sherrill then was inspired to visit a literacy center to learn how to read. He wanted to do better by his wife and five children, Sherrill told The Washington Post.

Eventually, when Sherrill took his son to enroll at Queens University, Sherrill made a bet with him: he’s going to school, too, and whoever got the best GPA each semester would pay the other $100.

Eight years later — three years after his son finished his undergraduate dcgree — Sherrill received his in human service studies. He hopes to find a position working with children who are at risk like he once was.

“I started a lot of things in my life I didn’t finish,” Sherrill said. “College wasn’t going to be one of them.”