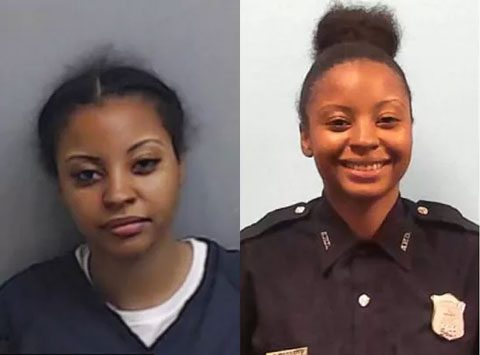 When police in College Park, Georgia, recently raided a residence they were looking for suspects and drugs. What they did not expect was to also arrest a cop with the Atlanta Police Department after finding her in a room filled with guns,  marijuana, prescription pills, $8K in cash and scared kids.

Iris Rowe had been with the APD since 2016 and was a mobile patrol officer in Zone 3 for nearly a year. She was at the apartment with her boyfriend Jeremy Laye, who was wanted on drug charges, and his two children, ages 4 and 5. Also present was another suspect identified as Tony Robinson. Recovered at the scene were over six pounds of marijuana worth an estimated  $30K, more drugs, two guns, including an AR-15 in the trunk of Rowe’s car. Also in her car was her APD uniform, badge, vest, radio and official ID.

When APD officials were informed of Rowe’s arrest, she was immediately suspended. Last week, an emergency meeting was held with APD Police Chief Erika Shields. The department informed Rowe that she would be terminated because of her arrest. Rowe instead chose to resign and sent in a handwritten note that expressed her regret to the department for her complicity in the drug trade. The next court hearing for all three is scheduled for June 27.