Baltimore filmmaker Dennis Williams broke into the industry by working in creative marketing and content for various digital media brands. Williams has come face-to-face with adversity, overcoming homelessness and moving to New York. It wasn’t until last year when Williams released his award-winning short film, Note to Self, that things began to turn around. His films was screened at film festivals across the country. This opened many doors for Williams, who is now developing a new TV series.

Williams shares why creating content is so important: “I’m a writer who has always pushed to tell stories of diverse perspectives that transcend culture.”

“Payroll” is a dramedy about three guys from Brooklyn who quit everything to start the largest music and tech festival the world has ever seen. He is bringing together an all-star cast for the developing series, including actors from MARVEL’s “The Defenders,” Netflix’s “Orange is the New Black” and HBO’s “Homeland.”

We caught up with the filmmaker to hear all about his rise to fame.

How did you arrive at this career choice? Was it a deliberate decision or a gradual and natural evolution?

Storytelling has always been a passion of mine, so I can guess you say that filmmaking found me. It’s something that I felt I need to be a part of because there are a lot of stories I’ve experienced and a lot to share. The deliberate decision is when I chose to step outside myself, and put pen to paper because there are people that need to hear these stories more than I feel the need to hold them captive.

My work in marketing in tech has continued to flourish as well: I was chosen as a Linkedin Top Voice in both 2016 and 2017, selected as #4 in marketing. Additionally, I was one of the first inductees of the Oculus VR content fellowship, a select program held at Facebook’s Headquarters, with the goal of building our own content platform in the world of virtual reality and augmented reality.

What role does technology play in your day-to-day life? How do you utilize it?

I try to use technology to make life easier, not to take away from my attention in the real-world. You have to use the advancements of tech to your advantage when it comes to your work. Social media and online communities have made it easier for you to put content out in a way you can control. Technology has undoubtedly broken the barriers of accessibility and I mean that in several ways. You can reach the masses via tools like YouTube, Instagram, even email. Technology has also made it easier to create. The cheaper cameras these days can make professional quality short films, so there’s no excuse for young creatives.

Donald Glover, shrugs. I’m sure everyone’s aware of him now, but he’s been an inspiration to me since he was an RA at NYU while writing for “30 Rock.” He was one of the first to use YouTube for his sketch comedy. This ultimately catapulted him to the attention of Tina Fey. At the time, I was amazed that you don’t have to fit in one box, as a student, as a writer, as a director, as a creative. If you’re that good, you’re that good.

Maya Pope-Chappell is a personal role model of mine, but undoubtedly a pioneer in the realms of journalism and tech. Maya is a Wall Street Journal alum, covering culture-dividing issues across the world. She is now a senior news editor at LinkedIn. Chappell has been instrumental in offering professional guidance to my career.

To be iconic — a consistent level of greatness. I’ve learned that it’s not done once, it’s not done for a week – it’s done every day. It always takes a unique perspective because thinking along with the crowd doesn’t allow you to do anything transcending.  There are several that have reached that level in a variety of industries – from Pharrell and his craft in music and his entrepreneurship in fashion [and] Ice Cube’s contributions to music and film behind and in front of the camera. Other entrepreneurs like Tristan Walker also intrigue me and should also be iconic for his early work at tech companies like Foursquare and Twitter after leaving Wall Street, and now the CEO of Walker & Co, the umbrella company of Bevel.

What keeps you inspired?

Life itself. My everyday experiences give me inspiration, whether that be stories that I think haven’t been told yet or new perspectives I’ve gained as I continue to grow professionally, creatively, and spiritually. One of the best pieces of advice I was given was to write what you know. Everything I create is near and dear to me and it’s my job to make it resonate with the hundreds of thousands.

My friendly competition also keeps me inspired. As other pioneers continue to create great work, that inspires me, as well.

I also have bigger goals for myself that haven’t been reached and until I reach those pinnacles, I have no desire of slowing down. Even then, I doubt I’ll feel satisfied. But maybe that is what will make me iconic, right?

Either worry or pray, but don’t do both. 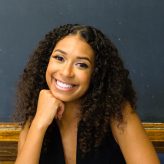