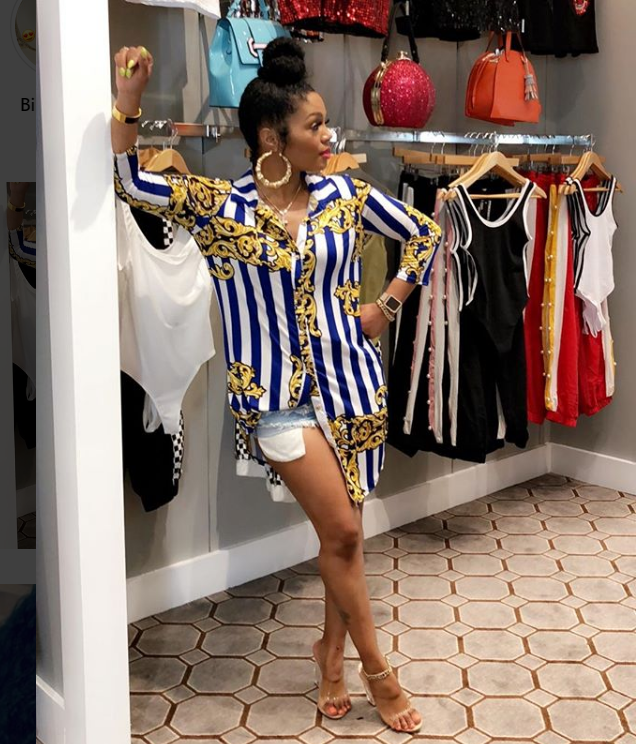 There are expectations on how fans should comport themselves when entering Rasheeda’s stores, and violators of the unspoken code will be dealt with:

Rule No. 1: Do not think that you are automatically entitled to a photograph with the rapper-entrepreneur or her mother without purchasing any items in the store. And, if you buy something, Rasheeda, 42, and her mother are not obligated to take a photo with you and it should be considered a bonus if they choose to grant you a selfie.

This was made loud in clear the other day when Rasheeda’s mother, Shirleen Harvell, 67, got into a profanity-laced shouting match inside Rasheeda’s store, Pressed, in Atlanta after Harvell refused to grant a fan a photograph who did not buy a product.

A video has surfaced, according to Gossip Queenz, showing two ladies shouting vulgarities and profanities at Rasheeda’s mother — and the proud matriarch returning fire — after she refused to take a picture with them.

The fans who insulted Kirk Frost’s mother-in-law were then shocked when Harvell unfurled a long list of profanities back at them.

Rapper Rasheeda mom Shirleen gets into a verbal altercation with some patrons wanting to take a picture! She wasn’t having it! 🙅🏾‍♀️#rasheeda #pressed #the #gossip #queenz #atlanta

“Love & Hip Hop: Atlanta” devotees are now debating whether Harvell has the right to refuse to take photos with people who did not purchase any items.

Others say she needs to protect her daughter’s brand at any cost.

One person responded to the viral video this way: “I think that’s messed up. How you gone charge to take a pic with the fan and you’re not performing for them. Just take the pic it comes with being a celebrity. That’s really awful that you sell it out of your store for pics. So if her thirsty ass fans don’t have money to spend, you can’t show the ve that’s why I don’t waste my time with these d list celebrities.”

Another person wrote under the caption that the young ladies disrespected Harvell for simply saying “no”: “Rasheeda I’m so sorry your mom got disrespected the way she did. If I were their mom, I would be embarrassed. They only hurt themselves. It’s a place of business first. She’s not under any obligation to take pics. They didn’t purchase anything, they went with Intentions of taking a pic and going to eat. She’s older than you, why go in and disrespect her like that? She said no, it’s no! No argument should have proceeded. Ppl are ratchet at the end of the day. SMH. In NY we don’t go to Fat Joe’s store with Intentions of pics, you buy and go, a pic is a bonus.”

This third supporter has Ms. Harvell’s back completely: “Rasheeda, I just want to tell you that I love ya Mother😍. She is the bomb. I saw the whole video they wanted a picture with her, but the policy is they have to purchase something, and they can get a pic they didn’t buy anything she kept trying to tell them the system they started with attitude first, and she’s not obligated to take a picture.”

Who do you think is right or wrong in this explosive episode?