After years of silence about her marriage to embattled crooner R. Kelly, ex-wife Drea Kelly has found the inner strength to discuss the alleged turbulent times with the “I Believe I Can Fly” singer.

The former “Hollywood Exes” reality TV star has revealed her own battle with domestic violence that adds to the vociferous cries of sexual abuse from many former alleged lovers.

And, as the country weighs in on R. Kelly’s “I Admit It” single that sent thunder claps across popular culture, Drea Kelly, 44, is releasing her mocking response.

The mother of their three children posted a photo of Whoopi Goldberg from the iconic film The Color Purple with her own remix lyrics to R. Kelly’s song.

Drea Kelly’s response is to R. Kelly’s originally 20-minute-long song which includes vehement denials that he sexually and physically abused underage girls or that he had  “sex cults” in Chicago and Atlanta, as was widely reported in the media. Those media reports, however, emanated from the women who reportedly had been living in the singer’s homes in the two cities. 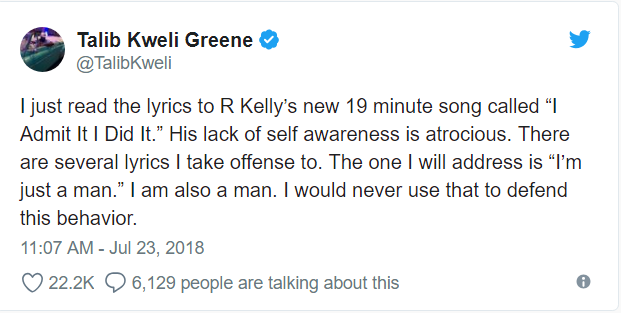 As anticipated, Drea Kelly’s scorching response incited pointed responses from both sides of this issue, with some supporting R. Kelly’s former wife while others are blasting her for trying to exploit the current situation for her own personal come up.

What do you think of Drea Kelly’s response?