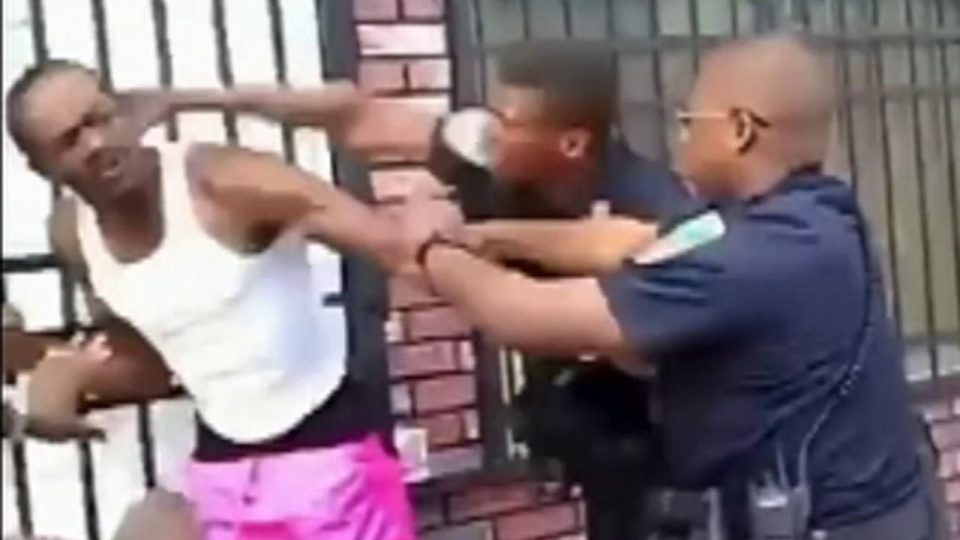 A highly-ranked Baltimore police officer was suspended with pay after a viral video shows him being the aggressor as he brutally beat down an unarmed man.

The violent episode popped off outside the Q’s Bar and Liquors in an impoverished area in East Baltimore, the Baltimore Sun reports.

The video shows Officer Arthur Williams pushing the man, Dashawn McGrier, 26, against a wall and then placing his hand on the detained man’s chest as they argued at high decibels. When the man tried to remove the hand and also barked back at the officer, it prompted the severe one-sided beat down.

The footage shows the officer landing numerous power punches on the man’s face and the cop continues to beat the man until he falls to the steps and then to the ground. After that, a second officer briefly holds the victim’s arm, as the first officer continues throwing vicious blows.

The accosted man did not try to fight back.

Bystanders in this predominantly Black neighborhood filmed the violent footage but only when the incident escalated to violence. The Sun reports that the officer and the victim had a previous run-in that led McGrier to be charged with assaulting the officer and a slew of other charges.

It is unknown what prompted the previous physical altercation, either. But McGrier has retained legal counsel after this second episode.

Subsequently, when the two crossed paths again and Williams wanted to question McGrier again, the tension was already intensified and quickly degenerated into a shouting match before the pummeling commenced.

Witnesses believe Officer Williams may have been targeting the beating victim in the incident, which explains why the man was initially yelling back to the officer.

“He knows his rights, and he felt as though his rights were being violated, and he took offense to that,” one witness told the Baltimore Sun.

Meanwhile, the much-maligned police department, which has been heavily scrutinized since the infamously violent arrest and death of Freddie Gray in 2015, says they will find out what prompted both violent episodes between these two men.

“The officer involved has been suspended while we investigate the totality of this incident,” Interim Police Commissioner Gary Tuggle said according to the Sun, adding that he was “deeply disturbed” by the officer’s behavior.

The second officer, who did not take part in the beating but did not try to prevent it, has been temporarily demoted to desk duty while the investigation runs its course.

Warning: the below footage, supplied by WMAR-2News, is violent.