Soledad O’Brien, once a popular anchor on CNN, smacked her former bosses in the face this week with the same charge they made against the Trump administration: the lack of diversity on the staff.

In particular, O’Brien put CNN Politics’ Twitter account on full blast when it had the intestinal fortitude to share a story about the lack of Black representation within the hierarchy of the Trump administration.

O’Brien then flipped the question back on CNN about the homogeneous leadership within their upper echelon. 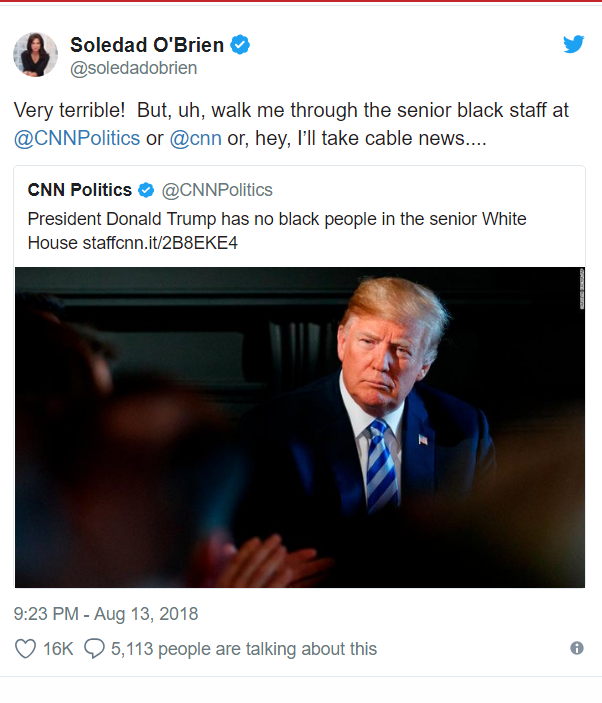 When ABC’s Jon Karl asked White House counselor Kellyanne Conway about the topic on Sunday, it was a follow-up to President Trump‘s public feud with former confidante Omarosa Manigault Newman.

“Who is the most prominent, high-level [Black] adviser to the president on the West Wing staff right now?” he asked.

Conway could not supply a single name.

The CNN Politics tweet on the subject said: “President Donald Trump has no Black people in the senior White House staff.” O’Brien turned it back and asked about CNN’s diversity in leadership roles, and for that matter in cable news overall.

CNN’s hypocrisy has been illuminated previously. Earlier this year, Fox News’ Harris Faulkner appeared on “The View” and was asked about diversity in Fox’s lineup. Sonny Hostin asked Faulkner if she got flack for being the “only woman of color with her own daily show on Fox.”

Faulker quickly retorted with “I know you say the only one on Fox. Where is MSNBC’s? Where is CNN’s? I think HLN, and that’s new.”

This is why O’Brien and others looked askance at CNN for casting aspersions at the White House for having a similar percentage of minorities employed within management.