Police officers in suburban Detroit swarmed around an unarmed Black man holding his infant daughter amidst an argument before they tased him several times during a turbulent arrest that was captured on video and quickly went viral.

According to WXYZ, officers in Westland, Michigan, about 30 minutes outside of Detroit, were called to the home because someone reported a fight during a barbecue the family was hosting.

“We were just barbecuing, and we saw the cops come up,” neighbor and witness Kelvin Williams told the news station. “They came up and asked us who was fighting. We were like, ‘You got the wrong house.’ ”

According to the station, this is when the father of the 2-month-old infant, Ray Brown, started getting agitated at having his evening ruined.

“At that point, my friend Ray got a little agitated, like you’re coming over to my house, my property, and you’re asking me about something I don’t know about,” Williams explained.

Williams filmed the scene and posted it online. Brown is seen loudly arguing with officers. One officer can be heard telling Brown that he’s going to jail for disorderly persons.

“What?” Brown exclaims in disbelief.

It was at that point that another person, who was holding Brown’s son, was told to remove the baby from the scene.

Officers start to surround Brown, who is still holding his son, with a taser out. Nichole Skidmore, Brown’s girlfriend and the mother of the child, tried to take the baby before any violence ensued.

At that moment, the distinct noise of a taser being discharged was heard, and the 2-month-old went flying of Brown’s hands.

“I had to catch the baby,” Skidmore told the television station. “I was in the street talking with the cops. I had to come over. The taser is on this side of him, and the baby is over here. As soon as they start tasing him, the baby flew out of his hands, and I had to grab him, or he would have fell.”

Many people were horrified by the cop’s actions. Their sentiments can be summarized by journalist Shaun King: 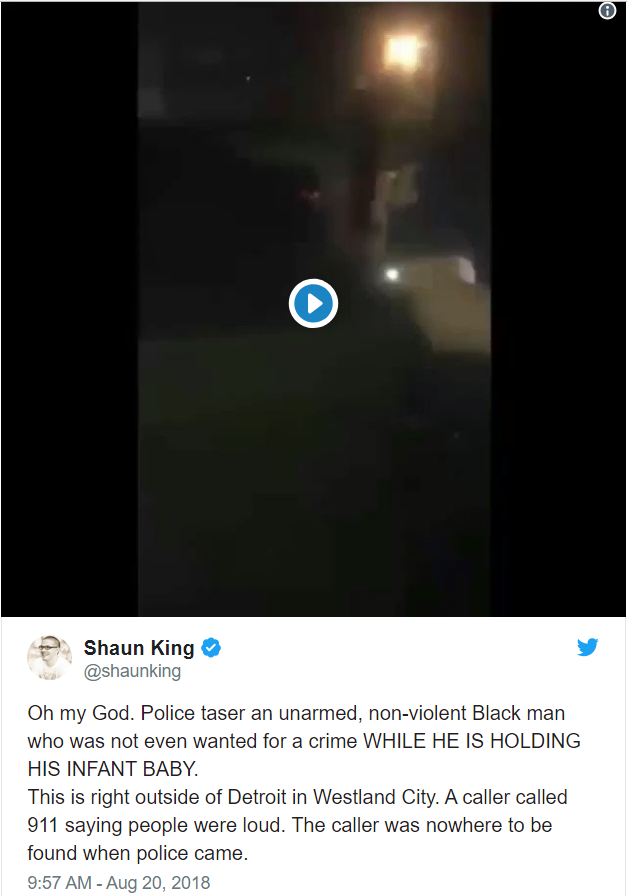 Westland Police later released the following statement to the mass media on Monday, justifying their actions:
“On August 17th Westland Police Officers were dispatched to an address on Belding Court in Westland on report that a male subject had physically assaulted a female and that he had damaged her vehicle.

“Like all Use of Force incidents, The Westland Police Department will conduct a thorough internal investigation to determine whether policy and procedure was followed and whether the incident was handled correctly. At this point in time that investigation is only in the beginning phase.”