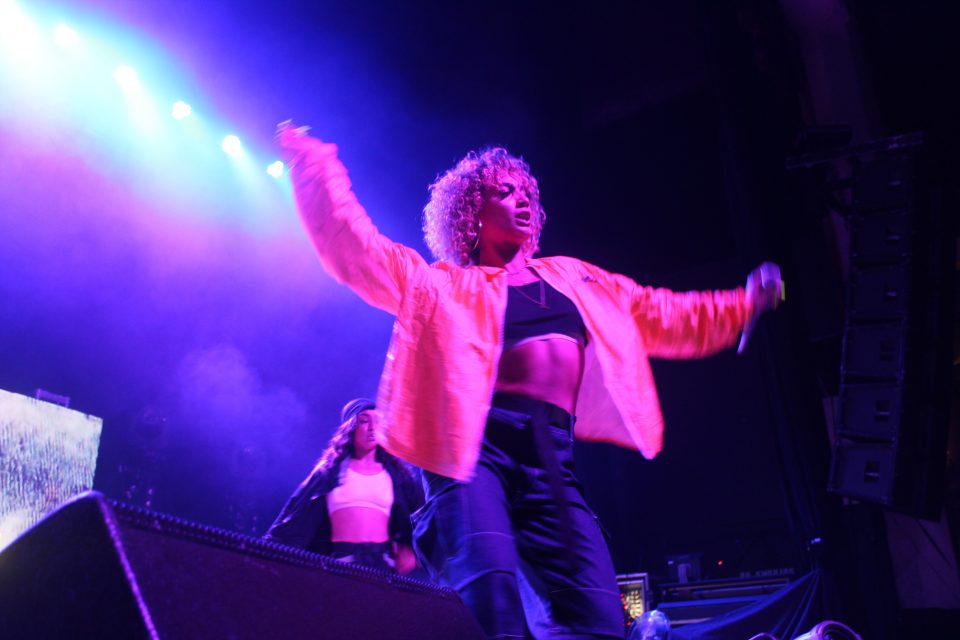 Danielle “DaniLeigh” Curiel is a fresh face to the music industry as a newly signed artist to Def Jam, but she is no stranger to the world of entertainment. The 22-year-old has been booked and busy since her childhood, which landed her the opportunity to write and direct the music video for Prince’s single “Breakfast Can Wait.” It was the last video he released before he passed. Prince gave DaniLeigh full creative control at the age of 18, after he chose her from her dance video submission. Before working with Prince, DaniLeigh did professional choreography for artists such as Pharrell Williams, Daddy Yankee, and Nelly Furtado, all while honing her singing career.

After her big break with Prince, DaniLeigh fully committed to her music. She created buzz that skyrocketed with singles such as “Lil Bebe,” “Lurkin’,” and “Play” featuring Kap G. Fans fell in love with her free-spirited sassy vibes on her EP, Summer With Friends, which was released this June.

Rolling out caught up with DaniLeigh after her performance. Read below as she shares information about being a part of a major record label, recording her first EP and more.

You’ve garnered an impressive resume, at such a young age. How has your life changed since you’ve been signed to a major label?
My life has been crazy: I have more of a fan base and I’m hella busy. It’s dope though. More opportunities keep coming, and it’s dope to see everything coming together. Even with me being on tour, and seeing people singing the words to my songs …it’s crazy. This is definitely the right time, but I was impatient at first. I know everything happens for a reason, but overall I’m really grateful.

After you moved to L.A., how fast did things fall into place for you and your family?
When we moved, I was 16 years old; we were really grinding. We had like a one-bedroom apartment. It was a real grind, but I think we started to get really blessed when I started doing dance teams. I really hustled when I was a dancer. I always made sure I was in the front, presentable… I wanted to be the best. With that, I created money being a dancer, but I wanted more, and I really wanted to make music.

You were sought after by music royalty. You had the opportunity to direct Prince’s music video to “Breakfast Can Wait.” Tell us about that experience, and what it did for you.
The fact that he was a part of my life was like confirmation for me that I was on the right track. He really believed in me. He gave me confidence to be myself, and taught me a lot about the music industry,

How did you land a record deal with Def Jam? How old were you?
I was an independent artist for like a year. I was dancing to make money to shoot and direct videos, to pay for covers, and this and that. It was hard to give that up to sing full time. So at that point, I was just about to go on tour too, I was meeting with different labels who reached out to me… and I thought if this is what I want to do, I have to give up the dance hustle, so I met with my A&R, and me and him had the same vision for myself. Every other label didn’t really see what I wanted for myself and tried to change me. I felt like my A&R and Def Jam knew what I wanted, so here I am.

Your EP Summer With Friends is trendy, fun, edgy, and flirty! What was the process like creating your first album?
It was like right when I signed to Def Jam. That’s when I started going hard with recording, working with different producers, playing around with different sounds. Like I was genuinely happy. I was enjoying my new life, being close with my friends, so I think that’s why I’m so proud of it. It gave me awareness. I feel like more people know a few songs on it, and I’m ready and excited for my next project.

Who’s on your radar to collaborate with?
I got a few joints with YBN Nahmir, another one with Lil Yachty, Bills…he’s fly. Collabs with me, like what’ll happen is I’ll listen to their music, then we’ll already have a friendly connection with them. We become cool, then we’ll make music. I like it that way because you’re creating a friendship bond, and making dope music.

What advice do you give to other millennials about the music industry concerning being newly signed to a label and adjusting to the new lifestyle?
Be prepared to work mad hard. If you want to be the best, you have to really work for it, on some no sleep type stuff. Make sure you have good people and a solid team around you, and know you have to still prove yourself. Think of creative ideas to get yourself out there, because they won’t do it for you.

Where can our readers follow you?
Follow @DanilLeigh on everything. Oh, and stay tuned for my new project.

See her work below: