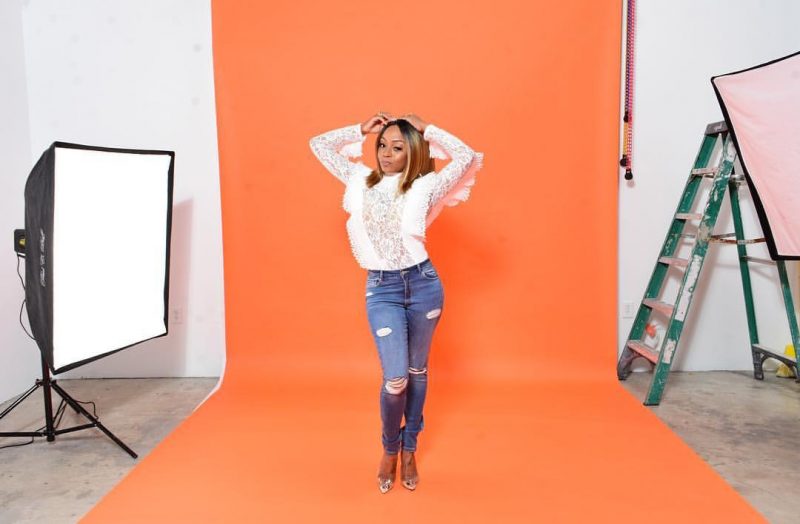 LaTavia Roberson is living her best life post-Destiny’s Child by balancing motherhood and a budding fashion career while hoping to inspire others with a yet-to-be-released docu-series and memoir titled I Am LaTavia, which she says will chronicle her battle with depression and alcohol abuse. The talented singer-songwriter is best known for her contributions on the chart-topping Destiny’s Child ballads “Say My Name”, “Bug a Boo”, “Bills” and “Jumpin’, Jumpin.” She has channeled the harsh realities of her past and turned them into real-life triumphs.

When Roberson is not motivating other mompreneurs and aspiring artists with her experiences, the Grammy award-winning diva is encouraging women to embrace their womanhood through fashion.

Tell us about the vibe surrounding your 2017 single “Best of Your Life” and the inspiration behind it. It has a very heavy electronic music sound to it — very different than any music you’ve put out from your Destiny’s Child days.
I’ve always loved alternative music, and about eight years ago, I started getting into EDM [Electronic Dance Music]. At that point in time, it wasn’t a song that was meant to be wordy but [more of] a chant. No matter what, be who you are. It’s the one time that you’ve got. Have the best time of your life. Be who it is that you were meant to be.

Speaking of Destiny’s Child, there was a time when you struggled with depression after leaving the group in 2000. What was that time like for you?
The time right after my release from Destiny’s Child was cool at first. A couple of years went by, and [then] things from my past started to come up. [Between] the absence of a relationship with my dad and [what] was going on between my mom and I, I started feeling depressed. I wanted to be in a shell, a cocoon and didn’t want anything to do with anybody.

Unfortunately, I [began] abusing alcohol to try to suppress the pain. I was [also] molested as a child. It was just a lot of stuff. It’s never the right way [to deal with it], but it was hard. At some point in time, we all fail but it’s how you get back up. It happens for everyone in their own time. It actually has molded me [into] who I am today. I wouldn’t take that back as hard as that was for me because it gave me thicker skin.

You’re so candid about your life experiences on social media. Have you found that people were more shocked as opposed to supportive when you revealed that you’ve suffered through molestation and addiction?
I felt both. A lot of people just don’t know. People look at entertainers and people in the entertainment business and they put you on this pedestal, [but] they don’t realize that at the end of the day you’re human. Things happen and you go through things as well. People were supportive, too. Once I did talk about being molested and [other] things I was going through, they thanked me for coming forward and being so transparent.

What have you learned about yourself while working on your docu-series “I Am LaTavia”? What will viewers be the most surprised to learn about you once it’s finally released?
In building myself back up and getting out of the hole I was in, I just wanted people to know who I was no matter what. They would be surprised that I’m not bitter. I’m living, loving and learning to love my life. You hear[a]  rumor about yourself that either is totally not true or, even if it is, somehow it’s always misinterpreted. Like me or don’t, I like this person that I see in the mirror. I am who God intended me to be. Period. I am Latavia.

At this point in your life, you have become quite the businesswoman outside of music. How did your private collection with Houston-based designer Alexandria Lee Designs come about?
She was the designer for a previous photo shoot that I did last time I was home [in Houston.] I fell in love with her collection, and we clicked immediately. We talked about doing a [collaboration on a] collection. I said, ‘Let’s do it!’ I’ve always wanted to be in fashion since I was 15 years old.

What is your collection called and how would you describe it?
The name is Papillon. I’m a girl from Houston that loves jeans and a T-shirt, however, I also love putting on a beautiful gown and showing off my curves. I’m just showing me in this collection.

How has your personal style inspired this line, and which fashion icons have been your inspiration?
The collection [is a combination of] many different aspects of me. Marjorie Harvey is a major fashion inspiration to me as she represents class, elegance and sophistication.

What is one thing you want women to feel when wearing a LaTavia Roberson exclusive from Alexandria Lee Designs?
I am woman! Own your womanhood.

For the budding fashionista, mompreneur or music artist, do you have any inspirational words or advice to share?
Know who you are, and stay true to yourself. If it’s what you want to do, then stick to it. You’re going to get some nos. If you know yourself and are passionate about what you want to do, then nothing can stop you. Never accept a no. Push those doors open!
I don’t believe in failure. People look at failure as something bad, but I look at it as a lesson to do something better [and] learn from your mistakes.