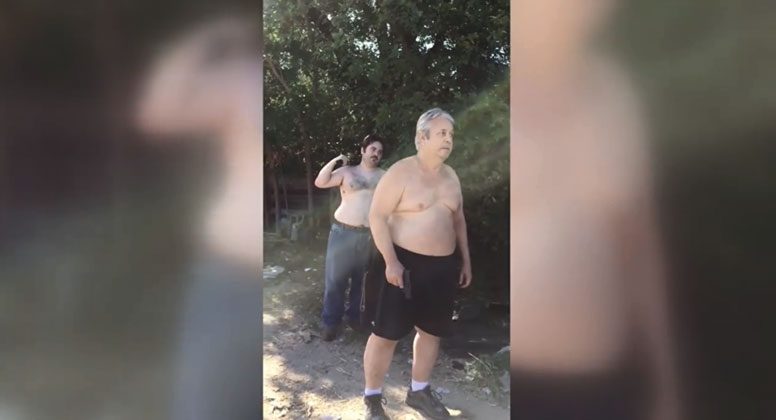 A graphic video was uploaded to YouTube by a woman who witnessed her husband shot dead over a discarded mattress. The incident occurred on Sept. 1, 2018, and involved father and son Johnnie and Michael Miller and neighbor Aaron Howard in Abilene, Texas. There were no calm heads in this instance of senseless gun violence.

According to Howard’s wife, Kara Box, her family had moved into the neighborhood in April. Prior to the shooting on Sept. 1, they had never had any encounter with the Millers. Box stated to the Texas Star-Telegram, “We had thrown out a twin mattress in a dumpster in our alley a few days before the shooting. You have to have the mattress in the dumpster or they will not haul it away.”

While Box and Howard were in front of their home and family members were in the yard, the Millers came out armed with a shotgun and pistol and removed the mattress from the dumpster and threw it onto the property of Howard and Box. When Howard demanded they put the mattress back, the Millers refused and pulled weapons. According to Box, “Aaron goes into pappa bear mode. … A man has just pulled a gun on his wife, his brother, his nieces and nephews.”

Angry words were exchanged and Howard’s brother handed him a baseball bat, but Howard never raised the bat at the Millers. Box stepped between John Miller and her husband to try to defuse the situation. According to Box, Miller pointed the handgun toward her head and told her to get down. She then stated that John Miller fired his gun by her ear and his son Michael Miller fired his shotgun into Aaron Howard, killing him. Howard had gunshot wounds to the head and chest.

Police arrived at the scene after receiving a 911 call and the Millers were taken into custody and charged with first-degree murder. The pair had bail set at $25K each and later were able to bond out.

Kara Box shot the encounter on her cellphone and released the video to the public so they can be aware of how her husband was killed. Since the murder, she has moved her family away from the Millers but remains in the city of Abilene, Texas.

The graphic video of the shooting can be viewed below.