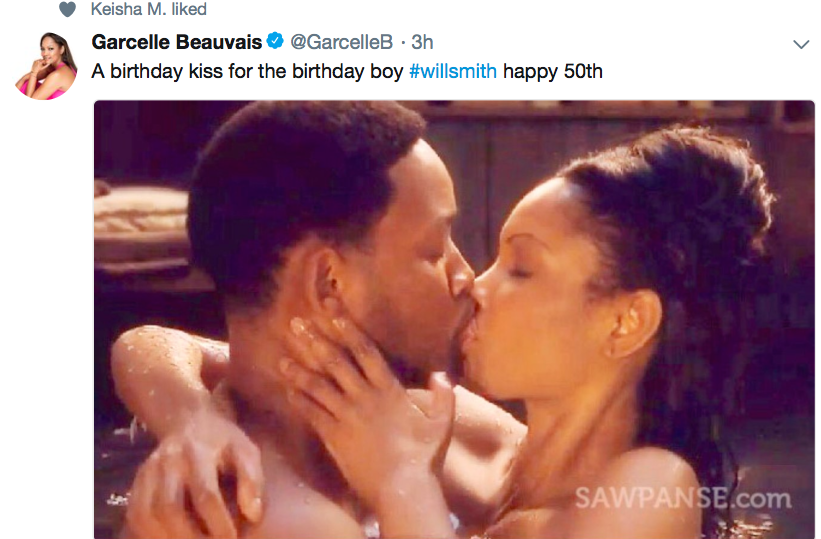 Garcelle Beauvais created a firestorm after posting an intimate photo with Will Smith. To celebrate Smith’s 50th birthday on Sept. 25, Beauvais decided to post an image of herself French kissing Smith.

The image was a screenshot from the 1999 film, Wild Wild West. During the particular scene, Beauvais and Smith were in a hot tub and kissed passionately.

In the caption of her Instagram post, which was dedicated to Smith, Beauvais wrote, “A birthday kiss for the birthday boy, #WillSmith happy 50th.”

In another post, Beauvais wrote, “Why is everyone so sensitive today? Lighten up it’s a Tuesday. (sic)”

After the backlash continued, Beauvais decided to issue somewhat of an apology.  “Ok, guys it was supposed to be a funny post. My bad if I offended anyone! If you are my followers you know I’m all about lifting up people and being positive being human I made a mistake. Have beautiful blessed day,” Beauvais posted on Twitter.

Beauvais was eventually blasted on social media by people who viewed her post as disrespectful to Smith’s wife, Jada Pinkett Smith.

I dont think Garcelle understands..there was nothing humoroua about posting a married man u kissed in an acting scene as A happy birthday lol..especially considering yall werent a memorable “acting” couple smh

Why do people think that Jada is about to trip over a still shot of Will and Garcelle kissing from ‘Wild Wild West’? She’s known Will over 25 years and Jada has seen that movie. Also, I’m sure she knows both of their senses of humor.

Garcelle is high key asking for attention with that post. No emotionally/mentally stable person would post a picture of them kissing someone else’s husband as a birthday wish but Jada is too mature to give her the time.

Oh Garcelle deleted the tweet but baby we have the screenshots

Garcelle was tryna be cute and got her feelings hurt 😂😂

Will Smith needs to provide us with a lot of answers. First, being the August Alsina post for Jada’s birthday. That was wild. Second, this new birthday post from Garcelle.

August Alsina writing love letters to Jada and Garcelle Beauvais just posted a picture of her kissing him for his birthday and I’m supposed to believe they aren’t swingers? 😂