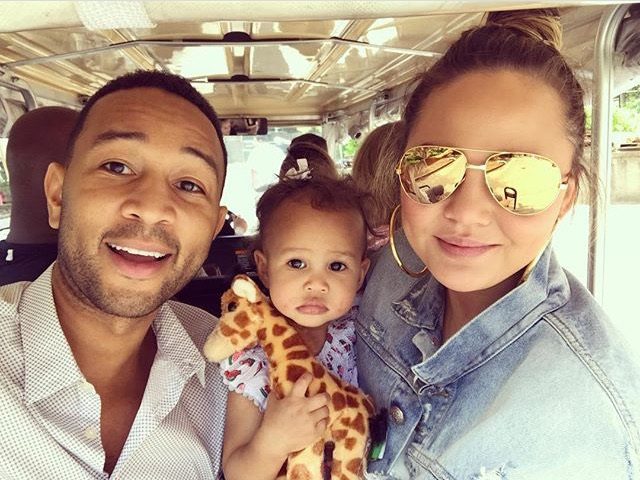 Chrissy Teigen and John Legend‘s daughter Luna is already following in her mom’s footsteps showcasing her love for beauty.

The 32-year-old model has revealed the couple’s two-year-old girl is already a makeup pro and has been a fast learner when it comes to knowing what tools are used for each cosmetic product.

She told “Entertainment Tonight”: “Every single time I’m doing my makeup I have to put her on the counter next to the sink, and we’re doing it together.
“She knows what each little tool is for, she knows that the brows go up, she knows certain brushes are for certain things, she knows where the lip gloss goes.
“But I will say, she’s really obsessed with nails. She’s like a manicure kind of gal.”
The star, who gave birth to their son Miles in May, has also opened up about the beauty secrets and tips she wants to pass on to her daughter.
Teigen said: “Do things for you. Do what makes you feel good, don’t do it to impress others or fit in this box for other people.
“I want her to obviously embrace her natural beauty, her natural face, her natural curls. She has this head full of beautiful curls and I want her to love that and embrace it… More than anything, I really hope that she embraces her little quirks.”
Meanwhile, the brunette beauty recently revealed she is working on a cookbook for kids following the success of her second recipe book, “Cravings: Hungry For More,” the sequel to her first tome “Cravings: Recipes for All the Food You Want to Eat.”
She previously said: “I really wanna make it awesome. I know kids have really simple palates, and we all want to make them more refined, but they’re just kids, so we’re gonna do stuff that kids are going to love.”
The “Lip Sync Battle” took to Twitter to ask her followers for inspiration on what dishes they’d like to see included and said she hopes the book wins over her daughter. She added: “It’s going to be so good. Hopefully, it’s Luna-approved.”