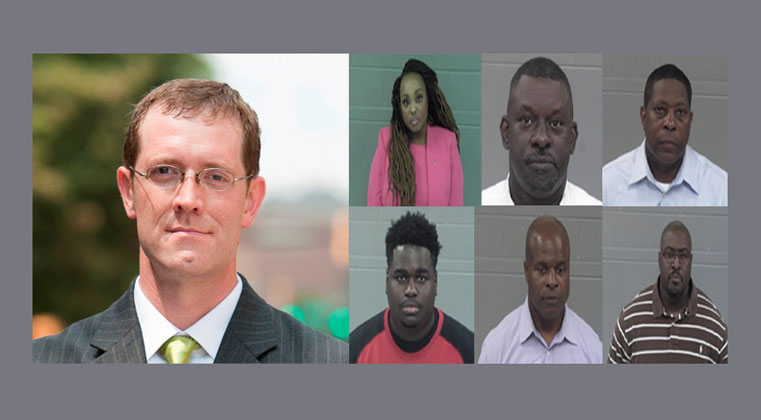 The arrests of seven alleged perpetrators of a sex ring at Fort Valley State University have shocked many, especially those within the HBCU community.

Rolling out spoke with David Cooke, the district attorney for the Macon Judicial Circuit who is responsible for prosecuting crimes committed in Bibb, Crawford and Peach Counties, about the scandal at Fort Valley and the charges.

What was your reaction when the case first came across your desk as a district attorney?

As a district attorney, I felt this was something that the GBI should investigate. The case was going to require a high level of investigative expertise.

Often when people think of human trafficking, the victim is someone young and being made to do things against their will. However, this case is being called a sex ring in the media or sex trafficking. Is there a difference?

I will not categorize this case beyond what evidence has been presented.

What was your reaction as a father with a child?

I have spent most of my career concentrating on cases that involve crimes against families and children. I knew this was something that had to be investigated fully.

The girls involved in the actual prostitution are victims. How is your office handling their situation?

The investigation is still open. But I must state that the those that have been arrested speak to the issue on how we are handling those involved. I must correct something, however. These individuals had arrests warrants issued. They have not been formally indicted.

In your estimation how strong is the case against the accused and will you be personally prosecuting the cases?

The judge felt there was enough evidence to issue a warrant for arrest. As a prosecutor, I cannot make any further comment at this time on the strength of the case. As a district attorney, I am in more of a quarterback role, to use a football analogy. I will guide the prosecution, but at this time it will more than likely be prosecuted by one of our assistant district attorneys.

What type of jail time are the accused facing? Is your office open to a plea agreement?

Again, I will not comment on such details. But I will say this: the charges of pimping, pandering, and sodomy are all misdemeanors under Georgia law. The only felony is a conspiracy involving Alecia Johnson’s fiduciary crime involving a school scholarship. So, at this time, a magistrate can set a bail. These are bondable offenses.

Is there a problem with prostitution and human trafficking in your county?

The problems in our county are no different than any other county our size in Georgia,

What do you say to young girls who may be facing the same type of situation as the student pledges at Fort Valley State University?

Tell someone you trust right away. It does not matter if it is the seduction or pressure, you are not alone. This happens to many people; you are not the only one. I was a prosecutor in the Atlanta area, and I saw cases involving middle school and high school students, so this shows that children are at risk more often than we know.