Longtime “Real Housewives of Atlanta” star Gregg Leakes will reportedly deliver a riveting and poignant letter to his wife Nene Leakes, revolving around his battle with cancer on Sunday’s season 11 premiere.

While the beloved couple declined to specify which cancer Gregg Leakes is fighting, he does recall for RHOA fans the process of excising cancer out of his body. The cancer was so aggressive and the prognosis so grim that Gregg Leakes said he had to have surgery the exact same day that the doctors made the discovery.

“I guess the scariest part about all of this is when we got to the hospital and the doctor saying that we need to do surgery on you tonight or you ain’t going to make it,” Gregg Leakes says on the show. “And so I went over and prayed to God and I told Him, ‘If it’s time, let’s go. I don’t fear death, I don’t want to go. If my work here is finished here, take care of them, let’s go.’

Because of this mindset of surrendering his fate to God, Gregg Leakes said he was able to sit down and pen a heartfelt letter to his wife NeNe, just in case he did not survive the surgery. But Gregg Leakes added that the writing pen never felt so heavy in his life.

“I wrote a note to my doctor and I told him to give it to you if I didn’t come out … Writing that note was the hardest thing I ever did in my life,” he said on the episode.

“You never know what’s in you until you at that door,” Gregg added. “I never thought I had it in me to fight cancer. Now, I want to beat cancer’s a**.”

Gregg Leakes was sure to thank his wife for being a warrior who gave him the strength to fight this malignant malady.

“You have been my light. I couldn’t do this without you. I couldn’t. I wouldn’t even try. So I want to thank you, baby.”

Nene Leakes also revealed it was hard dealing with Gregg’s cancer because it radically changed, and darkened, his attitude and outlook on life. 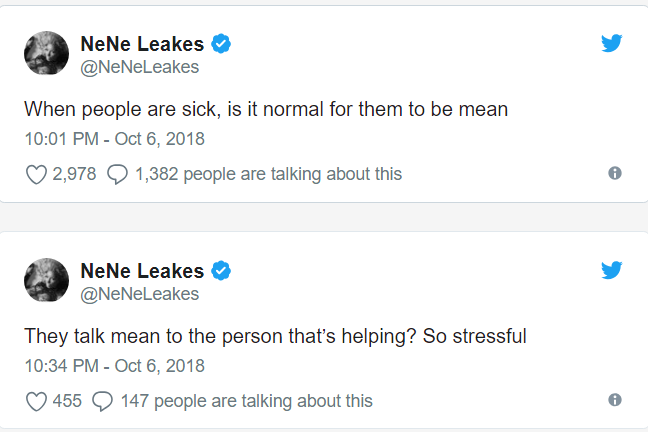 Check out a snippet of this powerful storyline along with the other cast members on this brief trailer on YouTube. The episode airs Suny at 8 p.m.