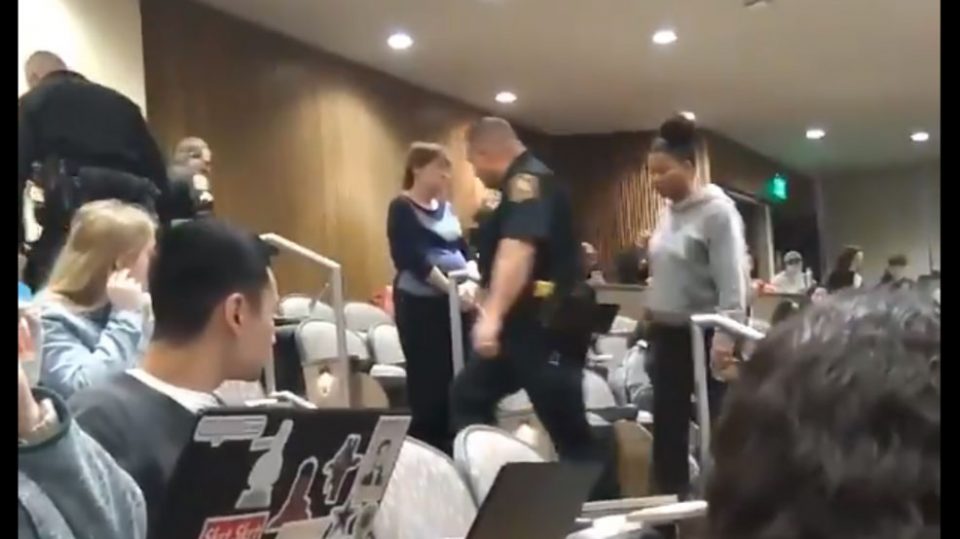 It boggles the mind how many White people are calling the police on Black people for the most mundane circumstances. Despite frequent news stories of the negative aftermath of such actions, seemingly educated people continue to engage in this behavior. The latest Black victim of such an action is a college student at the University of Texas at San Antonio.

The incident occurred in professor Anita Moss’s classroom while she was giving a biology lecture. Moss took offense at a student who had her feet on the chair in front of her. To combat this “uncivilized” behavior she called the police to escort the student out of the classroom. A fellow student recorded the incident and posted the following to Twitter:

So this happened today in class, a girl had her feet up and the professor called the police after calling our class uncivil 😬 pic.twitter.com/spq0ShXiFU

The Twitter user stated further in his post: “The class before this professor went on a whole tirade about how uncivil we all were because a few students were on their phone or not paying attention, cutting lecture time for the rest of us because her ego was bruised. As upset as I am that my professor decided to throw a temper tantrum the lecture before an exam and cancel class, I’m even more outraged that she would decide to single out and humiliate a student just to flex her authority in a destructive manner. I chose to attend this university because of its welcoming and inclusive atmosphere, and today’s events genuinely make me concerned for not only my fellow students but any future roadrunners that may choose to attend this institution in the future. @UTSA you need to answer for this, because I know we as a university are better than this. (sic)”

Today we had an incident where one of our African American students was escorted from a biology class by members of UTSA’s police department at the request of a faculty member. While the facts aren’t fully known regarding today’s incident, our Office of Equal Opportunity Services is already conducting an investigation into possible discrimination. In addition, an inquiry regarding the academic management of the classroom is being conducted by Interim Dean of the College of Sciences Howard Grimes.

“Beyond this particular incident, I am very much aware that the circumstance represents another example of the work we need to do as an institution around issues of inclusivity and supporting our students of color. This concerns me greatly, and it’s incumbent upon us as an institution to face this head-on. It’s something that we need to address immediately as a university community. I look forward to the arrival of Dr. Myron Anderson, our new Vice President for Inclusive Excellence, to assist us with developing a strategy to address these systemic issues.

“I welcome your concerns being shared directly with me and my office by emailing [email protected]  I promise to begin this process immediately – it will take time, but has my full commitment.”