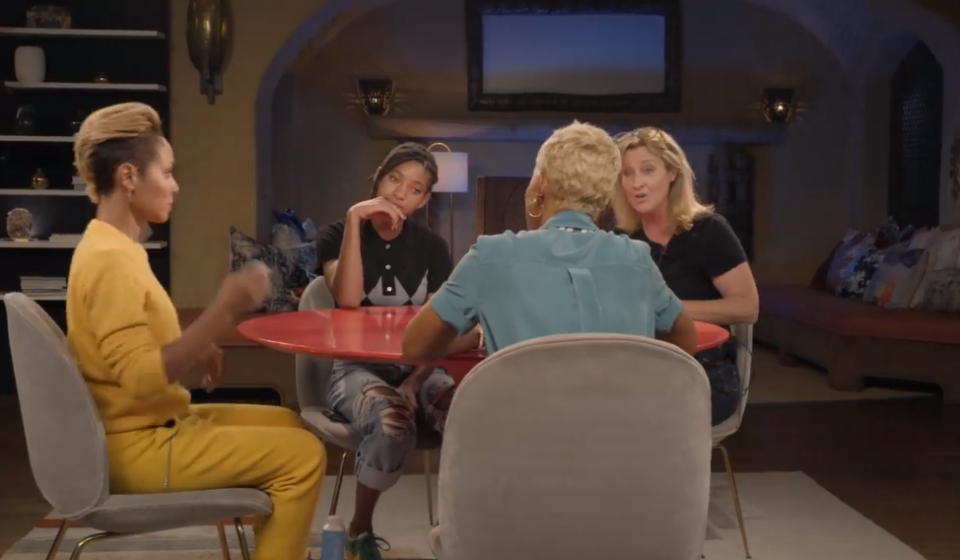 During this latest episode, Pinkett Smith (Girls Trip, The Matrix, Set it Off) proclaimed that she used to despise blonde-haired white women out of spite for the mean-spirited, racist way they treated her as a kid coming up in Baltimore.

On “Red Table Talk,” Pinkett Smith opens to her fans as well as her daughter Willow Smith and her mother about the “triggers” that once set her off about white women, including their blonde hair.

Pinkett Smith, 47, also remains perplexed about the complicated relationship between white women and women of color and why they can’t unify to bring out greater changes.

“I think what crushes me, specifically in my relationship with white women; the thing that really breaks my heart is that white women understand what it feels to be oppressed,” Pinkett Smith said.

Daughter Willow, 17, responded with, “Because of their sex.”

“Exactly. Because of their sex, [they know]” said Pinkett Smith, a mother of two and wife to Will Smith, “what it feels like to be ostracized or not being treated as an equal.”

Pinkett Smith admitted to her own biases, saying, “I have to admit I’m guilty [of] that to a certain degree because I do have my own biases, specifically to blonde women.”

“Blonde hair on white women just triggers me,” Pinkett Smith said while snapping her fingers. “I’ve had to catch myself.”

“Do you have a specific incident with someone who had blonde hair?” her mother, Adrienne Banfield-Jones, asked.

“Absolutely. All throughout my childhood. I do remember experiencing being teased by white women in regards to my hair, how I looked, feeling belittled,” Pinkett Smith said.

“I was going to do an interview with this blonde woman and I thought twice about it. I thought, ‘I don’t know if I want to do that.’ That was my first instinct because of how she looked! And I was like, ‘Oh! That’s no different.’ That doesn’t give me the right to clump all blonde women in one,” she continued. “And look at me, I got blonde hair! It’s no different than you getting robbed by a Black guy once and now you’re saying all Black dudes are thieves and dangerous.”

Pinkett Smith asked “Red Table Talk” producer Annie Price, a white woman, to share the table and provide her perspective on the racial divide between white women and women of color.

“Any time I want to have a conversation [about race] I’m afraid I’m going to offend somebody just by starting to talk,” Price said. “I feel like I’m going to say the wrong thing.”

She continued, “I hear a lot of times that white women have privilege and they need to recognize they have privilege. I’m sure I do. I just haven’t had the experience to recognize that I have the privilege. I don’t understand the feeling of racism. I feel a lot of times trying to be friends or trying to reach out to women of color, sometimes I feel like they don’t want to be my friend.”

Pinkett Smith added that “there is something unique” about “why Black women and white women have such a difficult time [talking to each other].”

“We, even as black women, have to be willing to look at our biases that keep us from being able to bridge the gap,” she added.