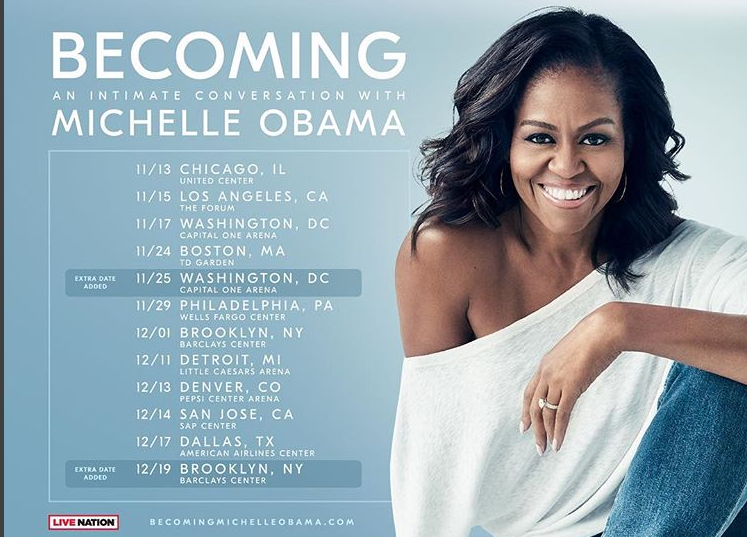 If you were unaware that former first lady Michelle Obama had rock-star like popularity, her sold-out national tour should clue you in on the latest with the two-time Ivy League graduate and mother of two. Mrs. Obama is slaying the book game with her bestselling memoir Becoming, and her star power is so blinding that her haters and critics (which are many) have to don sunglasses just to gaze at her.

The former lawyer-turned White House housewife-turned author tried to claim to Jimmy Kimmel that she and her husband, former President Barack Obama, are boring now. That’s not how her throngs of fans feel, as Becoming sold more than 725,000 units in all formats and editions in the U.S. and Canada on the first day alone.

The Chicago Sun-Times reports that Obama, 54, broke sales records with her latest book. First-day sales (including pre-orders) from Penguin Random House represent the largest single-day sales total for any book published in 2018 by the book publishing company, the world’s largest trade publisher.

Becoming was published with a first printing of 1.8 million copies of the hardcover edition. And the publisher has already gone back to press for an additional 800,000 hardcover copies, which raises the totals in the U.S. and Canada to 2.6 million.

Obama just sat down with “Black-ish” star Tracee Ellis Ross at The Forum in Inglewood, California, on the second stop on her sold-out book tour, which resembled a full on concert with the ear-piercing screams at her introduction.

These developments have some folks hopping mad.

New York Post writer Maureen Callahan, who attended Obama’s first book tour stop, sounded like she was ready to upchuck her stomach contents, calling her and her husband Barack Obama “gurus for hire” and hypocrites.

Here’s some of what she said.

“To read the worshipful press coverage you’d never know that, for Democrats, the unthinkable has happened: Michelle Obama has revealed herself as just another guru for sale.

“Lest that seem an exaggeration, note that the audience was subjected to a full hour of adulatory video packages set to female hero anthems — Katy Perry’s ‘Roar,’ Alicia Keys’ ‘Girl on Fire,’ Kelly Clarkson’s ‘Stronger’ — depicting Michelle Obama as the American Woman Nonpareil, with testimonials from students, veterans, teachers, celebrities, late-night hosts, even her own media-shy daughters. This is a dangerous exercise in hagiographic narcissism, one too easy for the subject to believe. It’s impossible to imagine any figure on the right getting such a pass from the media, let alone praise for it.”

Callahan, who represents a vocal minority of right-wing White Americans, also tries to clown Obama for portraying herself as a “groundbreaking historical figure and a celebrity” and for raking in “hundreds of millions in book sales and advances, a multi-year deal with Netflix, and speaking gigs to the Wall Street bankers they once vilified, righteously decrying the abandonment of the 99 percent as they breathe ever more rarefied air.”

Meanwhile, Obama took a reprieve from her book tour to visit her friend Ellen Degeneres. There, Obama discusses the hilarious situation when her daughter Malia went to the prom, among other delicious tidbits.

Check out Obama’s visit to the Ellen Degeneres show via YouTube by clicking here.