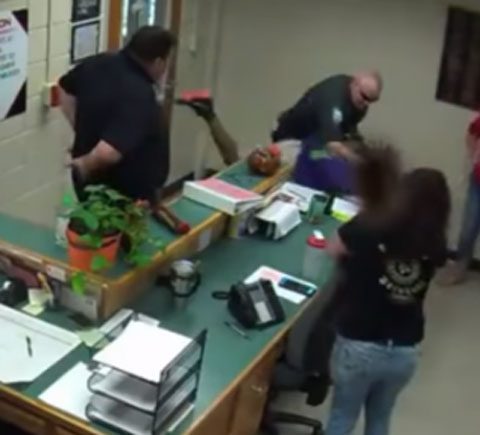 A Facebook video posted first to LiveLeak has gone viral after it was posted on social media. The video shows a Black middle school student being violently assaulted by two White school resource officers in what appears to be an unprovoked attack.

The incident occurred at Brusly Middle School in Brusly, Louisiana, on Oct. 5, 2018. In the video, an unidentified 14-year-old student had entered the principal’s office to call his grandmother. The student had been in a verbal altercation with an assistant principal.

At least three women are in the office when Brusly Police Officer Anthony “Kip” Dupre confronts the student a few seconds later. There is no audio to hear what the school resource officer is saying, but the student turned to leave and is placed in a chokehold and slammed to the ground.

The assault continues for several seconds as the office workers look on in shock. Then Brusly Police Officer Dan Cipriano entered the room and handcuffed the student, who is then body-slammed onto a desk. Afterward, the women are seen putting on latex clothes to clean up the area where the student was assaulted.

Brusly Police Chief Jonathan Lefeaux saw footage of the incident and asked for the Louisiana State Police to become involved. The state police then launched an excessive use of force investigation, which is still ongoing. Dupre and Cipriano were both placed on administrative leave after the incident and quit the force in October 2018.

According to WAFB-News, Doris Snearl, the grandmother of the student, is outraged and has demanded accountability. She has hired attorney Kwame Asante to fight the case on behalf of the student, whose name has not been released because he is a minor. Asante has stated that the student has suffered physical and emotional harm from the incident.

According to Asante, the child lost his mother unexpectedly and has suffered from anxiety and depression for the past eight years. His grandmother stated that her grandson is on medication at home and is regarded as a special-needs student.

Originally, police told the family that the student was the aggressor and tried to reach for Dupre’s gun. However, the footage was leaked to the press and showed that the incident was unprovoked.

“Then I saw the leaked tape and just was like, y’all lied to us. We were angry,
Asante said. “…We’ve seen the history of these type of incidents and what they have done to our community, that the impact and the trauma isn’t just with the family — it destroys the fabric of trust.”

Asante plans to file suit against West Baton Rouge Parish Schools and the Brusly Police Department over the incident. The Louisiana State Police Department has not indicated when it would finish its final report on the case.  Officials with the 18th Judicial District Attorney’s Office have stated to media that the office plans to bring the case before a West Baton Rouge Parish grand jury regardless of what the State Police probe may find.

The brutal assault can be seen here. Warning: It is graphic.