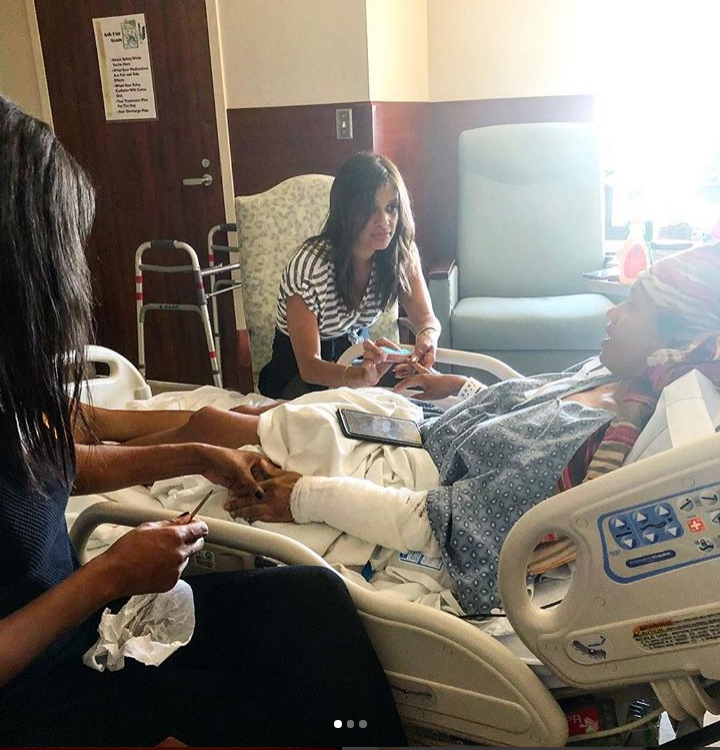 The glamorous and free-wheeling California life that actress-socialite Melyssa Ford knew came to a violent end in a horrific car crash in June that nearly killed her.

Today, the hip-hop model and former video vixen took a reprieve from her recovery efforts to provide a throwback pic of herself following that nearly fatal car wreck. Ford has had a hard time with recovery from all of her debilitating injuries from a physical standpoint — but especially emotionally and mentally as she spiraled into a deep, dangerous and “malignant” depression that consumed her like flames.

Ford, who starred in such films as Think Like a Man, Three Can Play That Game, Good Hair and Redemption of a Dog, used Instagram Thursday to provide an uplifting and introspective message on the aftermath of the accident.

#tbt I’m normally a pretty private person but if you don’t celebrate your own victories, why would anyone else? This was a month after the crash that almost took my life. I needed to support of a walker from the symptoms of post concussive syndrome. My speech And cognition was affected, I was constantly disoriented and I was scared. But what ended up happening over the next few months of recovery was intense self discovery: things that no longer fit within the realm of who I was or what I could accept or be a part of. Certain relationships fell apart due to the glaring fact that, at my worst moment, ppl I loved and would have done anything for couldn’t seem to muster the same energy for me and made excuses for their lacking. You live and you learn I guess 🤷🏽‍♀️Now that I’m better, my energy will be focused on projects and endeavors that are more reflective of the real me… at the helm of my own ship, charting my own course. Thank you to everyone who has cheered me on and rooted for and prayed for me.

This is a radical difference from the dark, brooding and pessimistic Ford who was fending off almost suffocating depression.

Back in June, an 18-wheeler crashed into her Jeep in L.A., causing it to flip three times. While Ford survived, as she was wearing her seatbelt, she sustained a fractured skull and has spent the last few months trying to recuperate.

The Toronto-born Melyssa Savannah Ford, 42, who studied forensic psychology at York University and is the product of an Afro-Barbadian father and a Russian and Norwegian mother, has progressed considerably since September, her first update where she seemed to be on the edge of a complete mental collapse.

Back in September, she wrote this on IG:

“I’m battling Depression,” she started out. “Crushing, malignant Depression. It was always there; it’s just been made a little worse because of the head trauma from the crash.”

“There are days where simple tasks takes the effort of 40 men,” she continued. “Mornings where I’m unhappy to wake and see the sun because it’s another day spent listlessly looking for solid meaning in life. The guilt I feel at having survived and not feeling constant gratitude is a heavy weight to bear. I’m trying to jump back into my life but it feels like there are two Me’s: Before and After.”