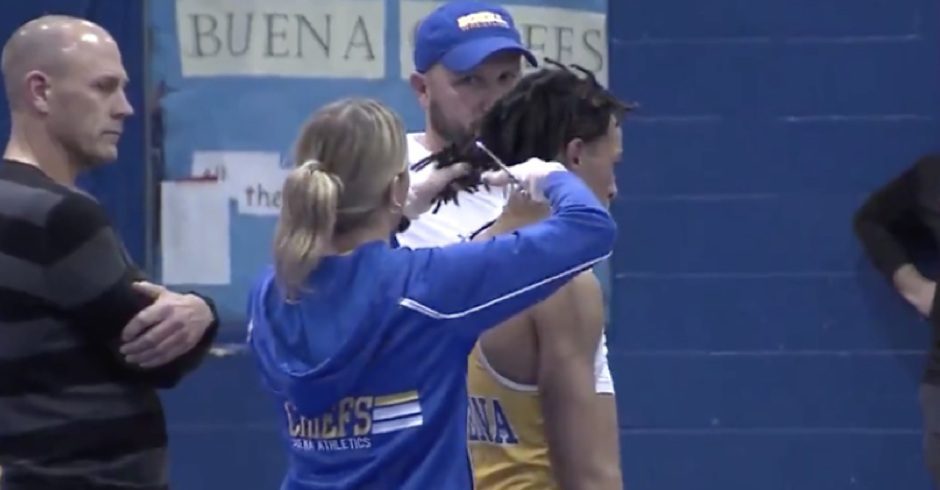 A White referee with a racist past continues to face a backlash after forcing a Black student-athlete to cut his locs. The incident occurred during a wrestling match between Buena High School and Oakcrest High in Atlantic County, New Jersey, according to SNJ Today News.

Alan Maloney, the referee assigned to the match, approached wrestler Andrew Johnson and forced him to his cut locs or forfeit the match. Johnson arrived with his hair covered in a wrap, but Maloney insisted he cut off his locs in order to compete. Johnson allowed an athletic trainer to cut his locs as attendees watched. A video of the incident was posted by Shaun King on his social media pages.

King also shared that Maloney has a history of racism.

In March 2016, Maloney used a racial slur during a gathering of wrestling referees and paid the price. According to Courier-Post, Maloney used the N-word during an argument over homemade wine and was slammed to the ground by a Black ref, Preston Hamilton.

Maloney was reported to the New Jersey Wrestling Officials and agreed to participate in sensitivity training and an alcohol awareness program. Maloney and Hamilton were suspended for a year — Maloney for the using the racial slur, and Hamilton for slamming Maloney to the ground.

“My son just got told that he cannot attend the school with his hair,” Clinton told his viewers on Facebook Live at the time. “If that’s not biased, I don’t know what is.”

Days later, sixth-graders Faith Fennidy and Tyrielle Davis were forced to leave school at  Christ the King School in Terrytown, Louisiana, due to their hairstyles. Fennidy, who wore braids, was captured on video crying as school officials told her that she would not be accepted in school.

The girls’ families have said the school’s policy violates the equal protection clause of the United States Constitution by singling out a hairstyle common among Black children. Maloney’s decision to force Johnson to cut his locs was reported to the New Jersey State Interscholastic Athletic Association.

While Johnson lost his locs, he eventually won his wrestling match with a takedown.