What makes Atlanta a “tech” city? After all, technology is everywhere we look today. Any company can surf the internet, build an app or use cloud-based data service. So, how did Atlanta make it onto a national list of the Top 25 Best Tech Cities?

Believe it or not, Atlanta stands out among its peers as technology industries in the city are beginning to play a much larger role in the U.S. economy.

Forbes started the conversation two years ago by referring to Atlanta as one of the top five up-and-coming tech meccas in the nation. According to 2017 article in the prestigious business publication, Jeff Perkins, the previous chief marketing officer of QASymphony, highlighted Atlanta’s thriving business community, citing the success of startup hubs such as Atlanta Tech Village, Switchyards Downtown Club and Advanced Technology Development Center, and institutions of higher education, such as Georgia Institute of Technology and Emory University, whose graduates go on to excel in the tech fields.

Atlanta is also known as the Black mecca of tech cities. It is home to the fourth-largest tech hub in the United States — Atlanta Tech Village. Justin McLeod, who recently was named diversity ambassador at Atlanta Tech Village, has had his hand in creating that notoriety. The Georgia State University graduate has been leading the way by supporting startups headed by women and racial minorities.

In 2017, global real estate firm Cushman & Wakefield went one step further and named Atlanta No. 17 on its list of “Top 25 Tech Cities” for that year. Factors used to determine who made the list included each metropolitan area’s institutions of higher learning, investment funding, well-qualified workforce, and entrepreneurship.

All combined, the chosen tech cities on Cushman & Wakefield’s list have outperformed other U.S. cities in employment, income and rent growth over the past seven years, making them some of the biggest drivers of the country’s economy.

Atlanta fits that formula perfectly, showing an average growth of about 4 percent in entrepreneurship between 2016 and 2017 as well as a high number of companies that averaged 20 percent growth over the last three years.

In April 2017, according to the Technology Association of Georgia, there were nearly 5,000 job openings in technology in the metro Atlanta area.

Known for its culture rich ecosystem, Atlanta was described by The Business Journal as “building more infrastructure and talent and creating growth that draws more resources to the area daily.”

Atlanta’s growth has been an incredible success story, and now the city is poised to build on that success, solidifying its place among the top 25 best tech cities in the country.

See where Atlanta’s ranked among on Cushman & Wakefield’s list of the top 25 tech cities in the U.S. below. 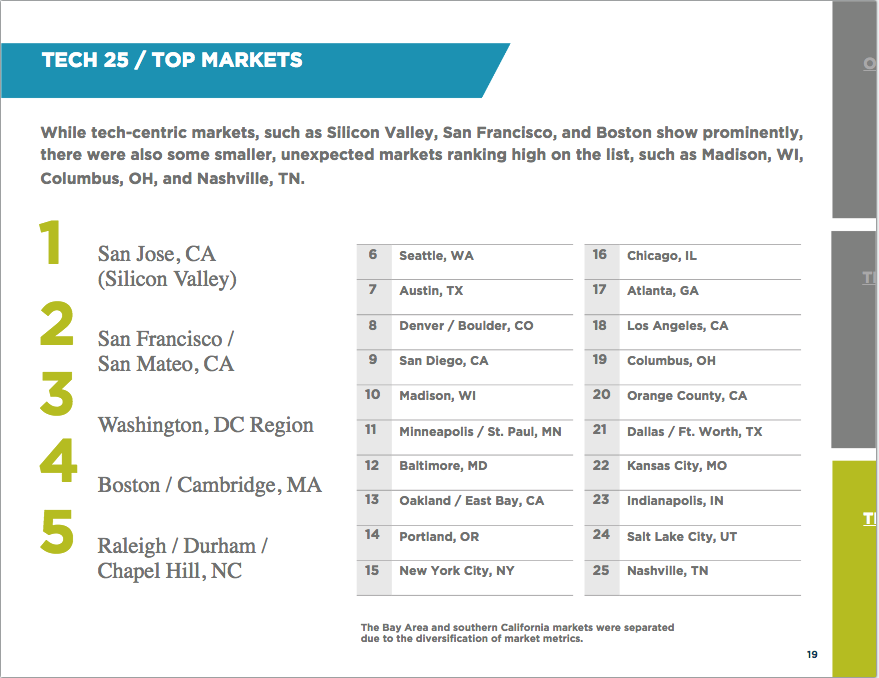