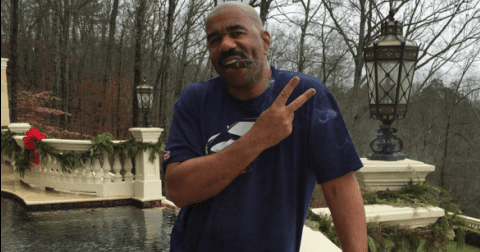 Fellow comedians Mo’Nique and Steve Harvey nearly came to blows on the set of the latter’s daytime talk show after Harvey made a bold request that Mo’Nique found insulting.

The Oscar-winning Mo’Nique (Precious) is flexing these days as the proud comedienne markets the fact that she has recently signed a Las Vegas residency. During her promotional tour, she made a stop at the “Steve Harvey” show, and that’s when things went left, TheJasmineBrand and BET report.

Both A-type personalities refused to back down from their positions after Harvey made a request that the comedienne allegedly found insulting and unsettling, inciting her to threaten to slap Harvey in his face.

Harvey, according to the aforementioned publications, boldly told the woman born Monique Angela Imes, 51, that she needed to apologize to Whoopi Goldberg for dismissing the Academy Award-winning actress of Ghost as “the help” in a recent interview. Harvey reportedly suggested that Mo’Nique should apologize to Oprah Winfrey and Tyler Perry, who produced the award-winning Precious, as well as then-rising director Lee Daniels.

After those words floated to the air toward Mo’Nique, she reportedly snapped immediately and “threatened to hit Steve in the face.”

Things reportedly degenerated after Harvey quickly shot back by telling her if she dared to follow through with her threat, “her husband would have to come out and square off.”

The publications reported that the cameras were rolling while the two high-strung personalities popped off at each other verbally.

There is no word on whether that heated exchange will be included during the editing process. The episode is scheduled to air in a few weeks, BET and TheJasmineBrand report.