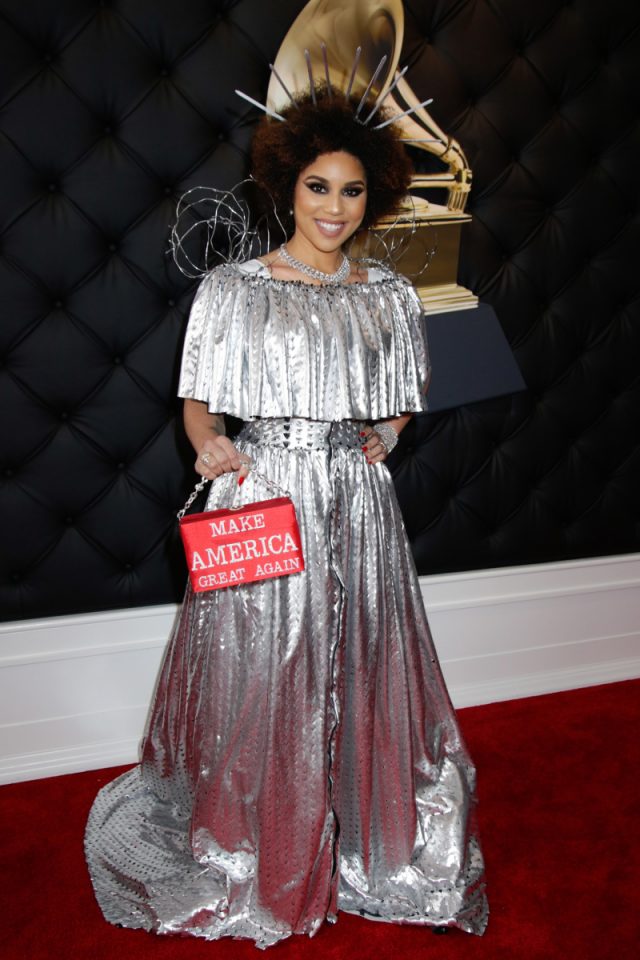 Most people don’t know and have never heard of alternative rock singer Joy Villa. In fact, most Americans never hear of her, save for once a year on the red carpet of the Grammy Awards. And during music’s biggest night of the year, the singer once again did not offer any music, but made another political statement.

The self-proclaimed feminist and right-wing Donald Trump supporter, who wore a “Choose Life” gown to last year’s show — replete with a rainbow painting of a fetus on it — walked the red carpet this past Sunday in a “Build the Wall” dress.

Villa was dressed as Lady Liberty in a silver off-the-shoulder look and crown.

Once she got settled on the red carpet, she pretentiously removed the outer layer and revealed a white dress with a brick wall motif painted on it and “Build the Wall” in red graffiti on the back. The outfit was completed with wrapped wire around her shoulders to look like barbed wire and carried a bright red “Make America Great Again” (MAGA) bag.

Villa’s presence mystified many music fans because she was not nominated for any music and was not invited to perform onstage. So the red carpet represented the beginning and end of her official Grammy activities. It left folks wondering how she keeps getting invited back every year.

“I don’t listen to haters. I listen to truth,” she wrote in the caption. “Building the wall will cut down crime, protect children from being trafficked and stop the 1 in 3 women from being sexually assaulted tying [sic] to get through illegally. It’s a humanitarian crisis. I support life. I support protection. I SUPPORT THE WALL!”

She added on another IG post that she does not “care what anyone thinks.”

Last year, Villa, who gave up a child for adoption, made a pro-life statement with her gown. The year before that, she wore a form-fitting blue MAGA gown.

Pop culture, based on the responses on social media, is already tired of the woman that they don’t really know, but whom they refer to as very “thirsty” and a classic “clout chaser.”

Since this is a “celebrity” my only reaction is the same reaction I had when Lavar Ball said Lonzo was better than Lebron. Why do they give these imbeciles a platform? The media just loves to stir the pot.🤦‍♂️ #Grammys2019 #NBA #LonzoBall #joyvilla https://t.co/m0OAQWIKn1

I would boycott #JoyVilla but I have no idea who the hell she is so I'll keep it that way.

Who keeps inviting #joyvilla to the Grammy's??

Who is Joy Villa and why is she even relevant? #joyVilla #Grammys2019 #idiot #brainwashed pic.twitter.com/FLnIEu0c2P

The people praising #joyvilla for standing for what she believes in, are the same that attack Kaepernick for taking a knee…#GRAMMYs#AlternativeFacts#Grammys2019
#https://www.yahoo.com/entertainment/grammys-2019-trump-supporter-joy-villa-wears-build-wall-gown-001848281.html

Who TF is #joyvilla? #who #GRAMMYs pic.twitter.com/aEoJOiBrb3

I’m a conservative but I hope your music has more originality than your publicity stunts. #JoyVilla #NiceTryThough

#JoyVilla? Never heard of her, but she’s not well admired. https://t.co/Ifs30Tp6KW

The Black delegation offers to trade #JoyVilla to ANY race interested. Willing to negotiate. https://t.co/INZOqGNjEb