Skip to content
News2 » Killer Mike takes on education, religion and the reality of ‘Trigger Warning’ 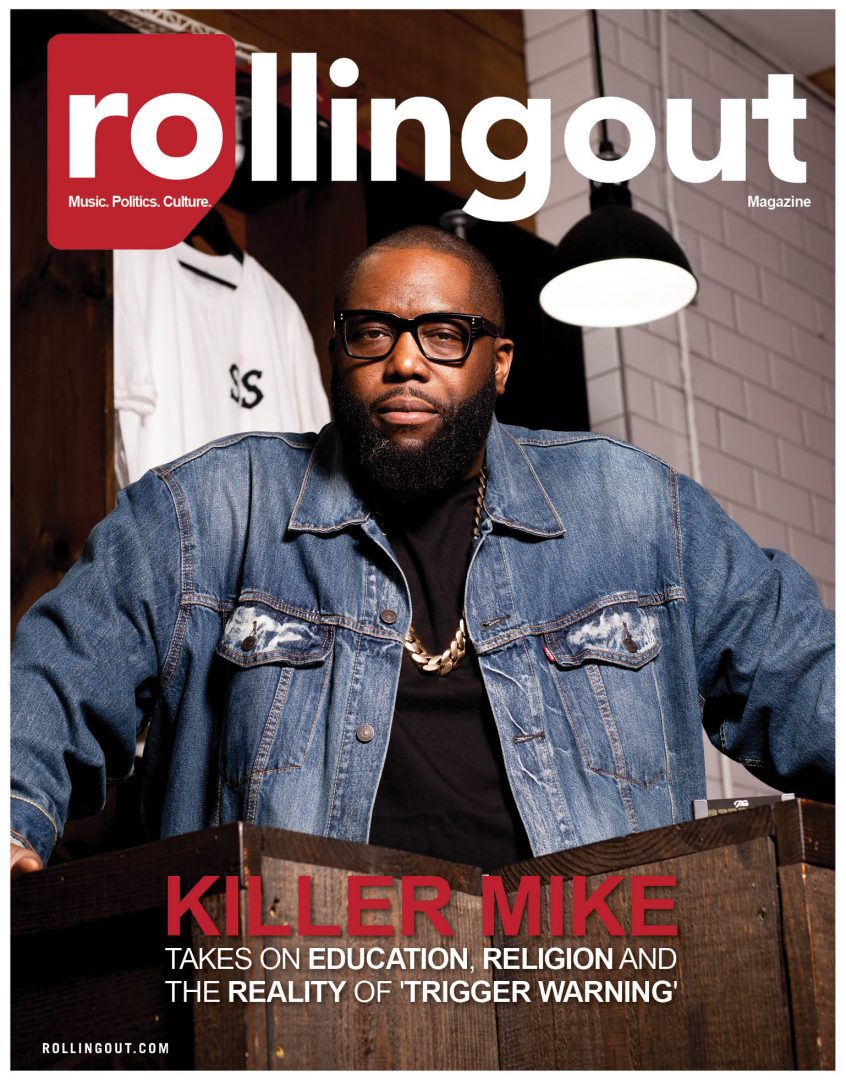 Days after the commencement of Black History Month, a barber’s chair became Killer Mike’s pulpit. During lively debates and discussions at The Swag Shop in Atlanta, a barbershop franchise he co-owns with his wife Shay Bigga, the outspoken Run The Jewels rapper gave his candid thoughts on a wide range of topics that included sports, politics, music, education, crime and capitalism.

Indeed, the Black barbershop serves as an institution where all testimonials and opinions are welcome. And on this day, Killer Mike used the platform of the barber’s chair to share his highly charged sermon.

Since breaking out with OutKast and the Dungeon Family in the early 2000s, Killer Mike’s street gospel has allowed him to serve as a prominent voice in the hip-hop community. He’s one of the few guys in rap who can tell gut-wrenching stories of the trap, go bar-for-bar lyrically with any battle emcee and also debate political pundits on CNN, Fox News and “Real Time with Bill Maher.”

Killer Mike took his rap and political ideologies and merged them into one with his new Netflix series, “Trigger Warning,” which gives him a chance to challenge the status quo and destroy conventional norms.

For instance, Killer Mike takes a stab at legitimizing the notorious Blood and Crip street gangs. Created in South Central Los Angeles in the late 1960s, the Bloods and Crips established reputations that revolved around drugs, violence and death. However, both gangs are nationally known with different sets that can be found in nearly every state in America. With both brands intact, Killer Mike decided to present an opportunity for both gangs to delve into legit businesses in the form of sodas called Crip-a-Cola and Blood Pop.

“We haven’t embraced our criminal culture for our own capital gain like we should,” Killer Mike told our publication while seated in the barber chair at The Swag Shop. “I see White criminality celebrated. We’ve been celebrating gangsters like Al Capone, Whitey Bulger and John Dillinger. Part of the mythology of NASCAR, is it started because of bootlegging.

“Essentially, bootlegging was a protest against prohibition. And that’s fine. Essentially, selling crack is a protest against the illegality of someone putting a substance into their body. My thing is that [Black people] have not taken advantage of an economic opportunity. … It brought me to the point where I took some brothers who are members of the street fraternity called Crips and tried to help them to establish a brand that’s been built over the last 40 or 50 years called a gang. I call it a street fraternity because most gang members I know are not actively gangbanging. They’re essentially like fraternal orders of brothers that go into regular working class… I think that they could put some things into the market. I figured we’d just put a soda out as Crip-a-Cola. And by judging by public response, it’s happening.”

In another episode of “Trigger Warning,” Killer Mike challenged the concept of the White Jesus Christ. He believes that Blacks will have trouble loving themselves when their deity is White.

“How can you see divinity in yourself if you don’t see yourself,” Killer Mike said. “If you’re looking at an image that looks like the image of the oppressor and you’re told that this person is the image of God, then you are being told to subconsciously think your oppression is ordained by God. You subconsciously believe that in order to get to God, you have to participate or cooperate with your oppressor and you don’t see divinity in yourself. And because you think you need an intermediary between you and God, you disconnect what you’re already connected to. I don’t participate in any of the big three religions. I don’t think it’s good for Black people to period, to be honest.”

While promoting “Trigger Warning” in New York, Killer Mike got into a heated debate with DJ Envy on “The Breakfast Club” about the value of public and private schools when it comes to Black kids. DJ Envy took the stance that private school was the best option for his kids. Killer Mike discussed the importance of Black kids having exposure to their own culture. The video clip eventually went viral and sparked dialogue about education in the Black community.

“I hated when people perceived it as an argument about private vs. public schools with my brother DJ Envy,” Killer Mike said. “My point was that Black people need to take examples from other cultures that essentially insulate their children until they’re about 13 and engulf them totally in their own culture. I have Jewish friends who didn’t go to a mixed school, besides Hebrew school or Jewish-based schools until they were like 12 or 13.

“Culturally, you need to send out a confident child into the world. With African Americans, we’ve depended so heavily on public school. In Atlanta, our public schools are dominated by Black students, Black teachers and the schools are named after Black leaders. By attending Frederick Douglass High School, I grew up in a way where my confidence was always high. Frederick Douglass once said, ‘It’s easier to build confident children than repair broken men.’ My theory is that if you’re in a place that is hostile toward Black people and your children, or the ideology, it may not be the best idea to put your child in a minority, majority situation where they may become unconfident.

“I don’t know if the presumed education we think we get is somehow better in private institutions or White institutions, or corporate institutions. I don’t know why we feel like that’s better, because if you’re not confident you’re never going to exercise what you know anyway. Your children shouldn’t have to wait to go to a historically Black college or university to feel confident about themselves. It’s easy to build them from kindergarten through seventh grade. For the first 13 years of your child’s life, you need to put a confident child out in the world more than you need a child who is connected through people who are culturally not like you and who are somehow going to make your child feel worse.”

“The first thing young people should do is not have any children until they’re married,” he said. “Never stop educating yourself, with either a trade or post-secondary education. And keep a job and live below your means. That will allow you to start to save money and come up with decisions on what to do. The wisest investment is to buy a piece of property for you to live on and to pay it off as quickly as possible. I would pick a place like Atlanta or Birmingham, Alabama, and I’d try to get a property at about $50–$65,000 that needed about $20–$25,000 worth of work. I would live on that property because that way it’s paid off and you can still pursue your dreams.”