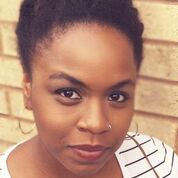 Between 1904 and 1907, Germany’s imperialist policies attempted to exterminate a whole section of the Namibian people.

Steppenwolf for Young Adults will examine that time in history when it stages Jackie Sibblies Drury’s 2012 play “We Are Proud to Present a Presentation About the Herero of Namibia, Formerly Known as South West Africa, From the German Südwestafrika, Between the Years 1884-1915,” co-directed by artistic director Hallie Gordon and Gabrielle Randle.

Randle offered her insights about this discomforting but important work that attempts to answer the question, “What does it mean to tell a story.”

What attracted you to Drury’s play, and what did you see you could bring to it as co-director?

The simple answer is this play is super smart. As I was reading it for the first time, I thought I knew what it was and where it was going, so I put my guard down and then s— got real. We as a culture consume so much media. Young people especially can see a twist from miles away. As a result, so much of what we consume as viewers we keep at arm’s length, and so no matter how brutal or truthful a work of art is, it barely scratches the surface. I think that is the most exciting thing about this play.

To answer the second part of your question, I’m a Black woman who has committed my life and work to making Black feminist spaces — spaces dedicated to caring and nourishment, trust and risk.

What lessons do you hope students and public audiences learn from the performances?

I want the students, in particular, to see that failure is a part of life, and I want them to learn a new way to look at failings that they have been taught are deeply personal; that sometimes the things that get in our way are beyond our control; that at any given moment we are fighting the forces of historical, societal and systemic oppression without even knowing it.

This play isn’t about personal growth. It isn’t about doing better next time. It is about stopping for long enough to see what and how and why you were set up to fail in the first place and questioning that. I’m excited to think about how that challenge will land with students.

Thanks to Steppenwolf for Young Adults and their City Connections Partners, BUILD, Chicago Public Library and the Chicago Park District, this play will tour six Chicago neighborhoods in the coming weeks. Why is that important?

Oh my gosh, it’s the most important thing! The toughest obstacle for theater is getting the people in to see the shows you want them to see because theater is about communion, it’s about accountability, it’s about resonance. How can you commune if the stories you tell are always to the same people? How does accountability work if the same audiences ask the same questions? How do you know if your work is resonating if it’s literally only ever bouncing off the same walls? I’m so thrilled about the tour and the mission of SYA in general. They and their partners are figuring out what theater is and looks like for the future.