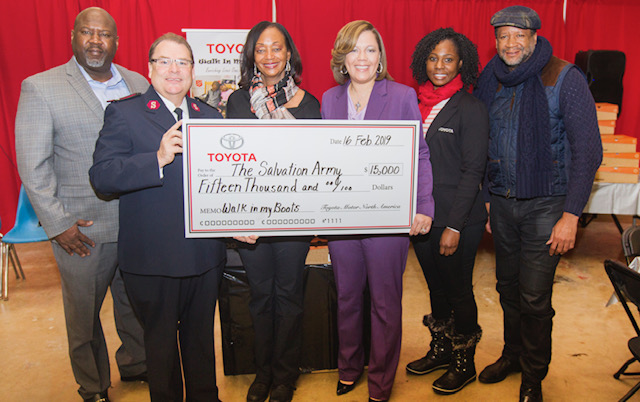 Toyota North America considers itself more than “just a car company.” As part of its efforts to serve communities and support local organizations, the company stepped up this winter to help shield Baltimore families in need from the inclement elements through its “Walk In My Boots” community outreach program.

“Toyota understands the importance of getting from point A to point B with dignity and reliance, and this is what they are giving to our clients,” said Major Gene A. Hogg, commander of The Salvation Army of Central Maryland. “During these cold winter months, the families we serve will now have the dependability and warmth of appropriate winter footwear thanks to the Toyota Walk In My Boots event.”

This winter has proven to be one of the coldest in recent history. Many programs offer winter coat giveaways, however, Toyota North America opted to focus on feet, which often are left vulnerable, especially in frigid temperatures. More often than not, low-income families are forced to use local modes of public transportation or walk in the cold. That could put those families at severe risk for hypothermia, with potentially fatal consequences. Having the proper footwear can help keep feet dry, comfortable and warm for longer periods of time.

As part of the program, Toyota also donated $15,000 to The Salvation Army of Central Maryland, enabling the nonprofit organization to continue to provide support for families in need.

“At Toyota, we want to build more than just great cars and trucks,” said Alva Adams Mason, national director of multicultural business alliance and strategy and multicultural dealer relations at Toyota Motor North America. “We believe furthering the success of our communities is key to our success. We want to be a vehicle for change by strengthening our communities for today and for the future. And, we hope that our donation of winter boots and socks to the families will help to enrich their lives … one step at a time.”

The timing of the winter boots and socks giveaway was a comfort to many as freezing rain and snow hit Baltimore during the week. Nicole Fortune, national manager of customer relations with Toyota Financial Services, participated in the program this year. She and several members of her staff helped families try on new boots.

Baltimore’s Meshelle, The Indie Mom of Comedy, encouraged the families to follow their dreams and never give up. Munson Steed — CEO of Steed Media, publisher of rolling out and author of a new series of children’s reading books and coloring books titled Little Professor Skye and Atom Smart — was on hand to distribute and autograph his books for the children, compliments of Toyota. The families also were treated to a “Thanksgiving-style” buffet luncheon prepared by Black Tie Caterers.

This is Toyota’s third year supporting the program in Baltimore. Overall, Toyota has donated more than 600 pairs of winter boots and socks to local families and contributed more than $45,000 to The Salvation Army of Central Maryland. The project also has been held in Detroit; Chicago; Washington D.C.; and Harrisburg, Pennsylvania. 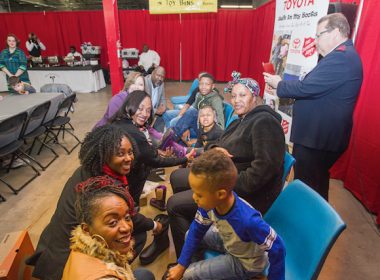 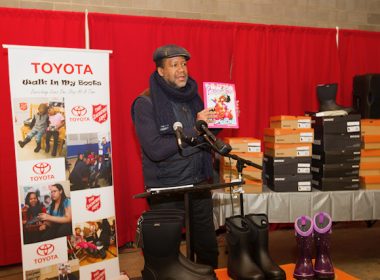 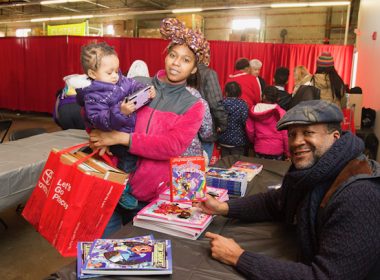 Munson Steed and one of the families from the shelter receiving her autographed book. (Photo Credit: Munson Steed)