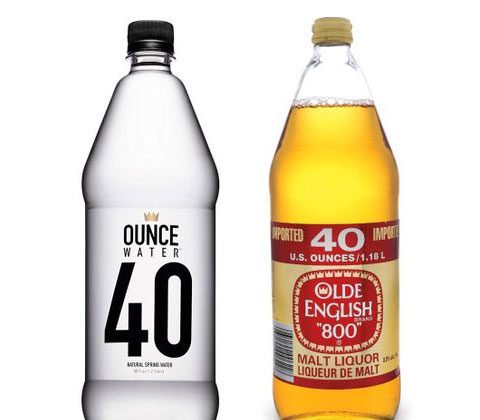 One of the most well known and stereotypical images of inner-city life is a Black person drinking a 40oz of malt liquor in public. Not only is the image used offensively, but it also underscores the issues of healthcare and targeted marketing of Blacks as the largest consumers of malt liquor. Now one company’s attempt to sell water in the familiar malt liquor bottle, labeled as 40 o Water, has backfired in the Black community.

It is a known health fact that daily consumption of eight glasses of water, is essential to good health. So as a marketing tactic, Ounce Water, founded in 2015 by Sons of Anarchy star Theo Rossi and his wife Meghan, had an idea. That idea was to target the Black community with bottled water in the familiar 40oz size bottles of malt liquor brands like Colt 45, Olde English and Private Stock. The company even uses the tagline “Get Ounced,” along with hip-hop culture inspired ads. The plan has backfired in one Brooklyn community where activists have called the product “blackface in a bottle” and demanded the item be removed.

The community activist group, Breukelen RISE, wrote a letter to the company that states in part:

“In a community that has been ravaged by alcohol and drugs, we are confused as to why someone would create a product that so closely resembles a malt liquor bottle. We cannot get behind this product staying on the shelves in our community.”

Now the company has pulled the 40oz product from stores in the neighborhood, but many feel the damage has already been done.