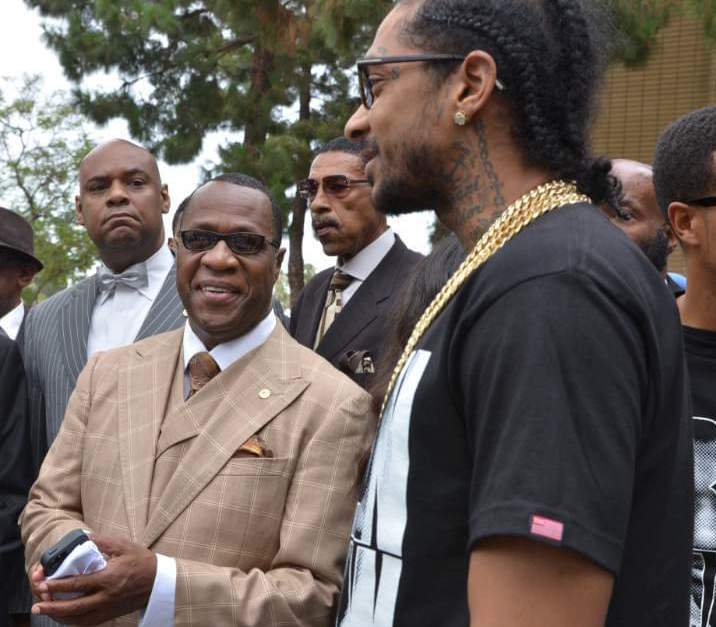 Members of the Nation of Islam paid tribute to fallen rapper and businessman Nipsey Hussle on April 7, 2019, by giving an awe-inspiring salute. Video of the tribute has gone viral.

Minister Tony Muhammad, a prominent figure in the Los Angeles community, helped to organize the tribute and has played a key role in helping to stop gang violence. Muhammad shared his thoughts on the Nation of Islam’s salute and his relationship with the legendary rapper.

His first encounter with Nipsey Hussle occurred in 2005 when Muhammad faced police brutality while attempting to help the community.

“In 2005, one of the Rollin 60’s Crips was murdered by a rival gang member,” Muhammad recalled. “The victim’s family asked if I would come out and do a prayer vigil to help keep the peace. The police came out to intimidate the brothers, and I stepped up to confront the police officers and let them know what we were doing. Some of the police reacted and a fight broke out between the Nation [of Islam] and the police. They handcuffed me, threw me to the ground and start kicking me in my face. Nipsey was a teenager then, and he and a few others were yelling at the police to leave me alone.”

“When Nipsey and I met at the event, he shared the whole scenario of what occurred in 2005, and he told me why he had love and respect for me,” Muhammad shared. “Since then, he would call me every now and then and tell me what’s happening with him, and I would give him advice.”

Muhammad and the Nation of Islam, whose members often supported Nipsey Hussle’s Marathon Clothing store, have served as prominent voices following the rapper’s untimely death. Minister Louis Farrakhan will reportedly visit the store for the first time on April 10 and speak at Nipsey’s homegoing service at the Staples Center on April 11.

Following Nipsey’s death, the Nation of Islam was able to keep residents of the community at ease and performed a powerful salute to Nipsey.

“I wanted to show the community how we do a military salute in honor of Nipsey,” Muhammad shared “That was the first time that a lot of people have seen a salute from the Nation of Islam and it has since gone viral.”

View the Nation of Islam’s salute to Nipsey Hussle below: