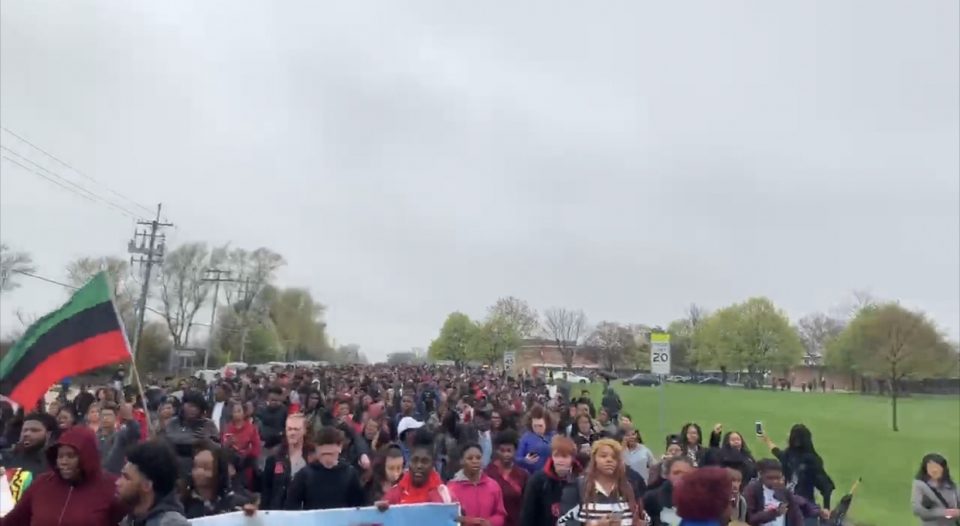 Homewood-Flossmoor High School students staged a walkout on April 30, 2019, where they protested the lack of action taken against the three White students who paraded around the city in blackface, insulted a young Black woman at her job and shared footage on social media that eventually went viral.

The students were spirited and well organized. They shared very strong insight and their sentiments regarding this racist activity. Rolling out, by way of its student correspondent Kahlid Lamarre, asked junior class president Demi Ofeyso, who organized the walkout, why it was important to take such a stand and how it felt to see the pictures of the White students wearing blackface.

“Participating in this protest is important because if we don’t speak up, who will?” Ofeyso said. “The walkout was a progressive step toward the awareness that we want on racial issues in our community. I knew it would be important for me to set this event up and use my voice because this issue would have the chance to repeat itself. So I decided to speak out for basic human rights and the dignity of what we stand for at H-F.

“As junior class president, this meant a lot to me because the student body trusts me to be their voice in times like this so that we don’t accept situations like this. I want a cultural sensitivity forum and awareness throughout the school about racism. I was totally disgusted, emotional and angry, as many others were, hearing about this situation and how it ‘was being taken seriously,’ when these boys are still saying they will be at baseball practice and haven’t received a punishment. We are the victims, and we deserve better, and I don’t plan on stopping till we get exactly that.

“The whole situation with the boys I believe was not handled properly. These boys deserve some type of punishment, not just a slap on the wrist.”

Senior Justin Whiteside said it was important for him to participate in the walkout. “Before this walkout, there was no action taking place,” Whiteside said. “The administrators knew that people didn’t like the way they handled things. We just made a statement with this walkout. I don’t know if anything will change with just this. We may need to do more to help them change their minds, but this helps bring more awareness to the issue.”

Daniel Green, also a senior, agreed.  “We are spreading awareness that this is not OK anymore,” Green said. “This is something that shouldn’t ever happen. Sadly, as I grow older, it seems like racism is never going to end.”

Take a look at a clip from the march below:

The students of Homewood Flossmoor High School  in Flossmoor IL right outside of Chicago staged a walk out after an offensive video of three white students wearing Blackface went viral. Details of this story are still surfacing. Stay tuned to rollingout for more. 📹 Kahlid Lamarre 🖊 @precise_chi