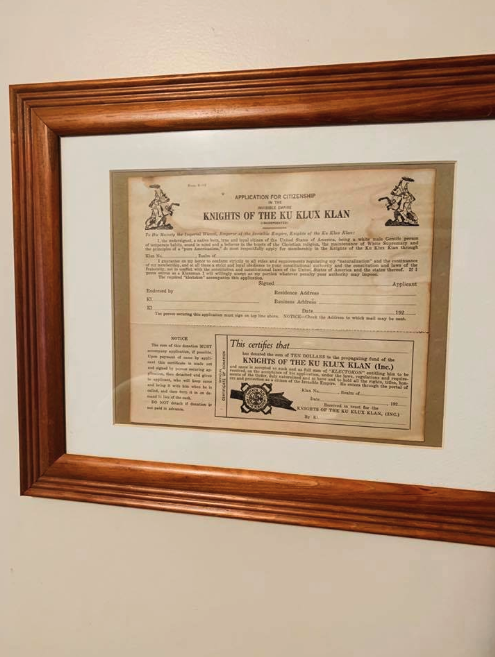 A Michigan police officer has been placed on administrative leave after prospective Black homebuyers found a framed KKK application hanging in the White cop’s bedroom.

This same officer, Charles Anderson, made headlines 10 years ago for fatally shooting a Black “suspect” but was cleared by Internal Affairs.

Rob Mathis and his wife, Rena, and children were out touring homes throughout Michigan when they found the home of their dreams. The house was being sold by Anderson in the city of Holton, Michigan, in Muskegon County, about 213 miles west of Detroit.

Mathis told MLive.com that his internal alarm bells began going off when, as the real estate agent showed them the house, he found Confederate flags on the walls and other racist memorabilia throughout the house.

Despite these misgivings, Mathis said he could have overlooked those things and still purchased the home. But what Mathis found in the cop’s bedroom horrified his family. He saw Anderson’s framed application to join the Ku Klux Klan hanging on the wall.

The father said he gathered the family and bolted from the home after that sickening sight.

“I’m still disgusted by it. I’m hurt,” Mathis, a veteran of the U.S. Army, told MLive. “You can’t serve your community and be a racist. You can’t. There are people of all different colors, of all different nationalities … out there that you have to serve and protect. You can’t just protect one group of people.”

A white cop in Michigan is on paid leave after a Black prospective buyer toured his home and found a framed KKK application and multiple Confederate flags.

But here is where the story takes a turn for the worse. When Anderson and his wife could not possibly deny the existence of White supremacist memorabilia in their home — because Mathis posted photos of them on his Facebook page — the Andersons tried to justify having the material in their home.

Anderson’s wife, Rachel, told WOOD-TV that her husband is not a KKK member. Laughably, she says her husband is being misconstrued and she dismissed the framed KKK application and Confederate flags as just a man being an avid collector.

“I like antiques, but I collect things that I represent. You can go in my basement, we have Detroit Lions, Red Wings, Michigan stuff, everything we associate ourselves with,” Mathis told WOOD-TV. “So why would you collect something you don’t associate with yourself?” 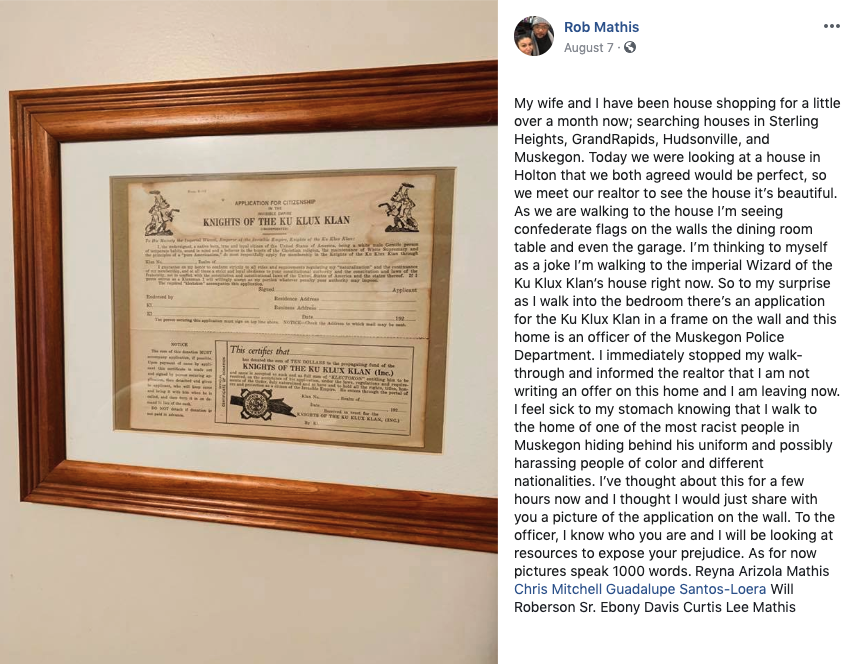