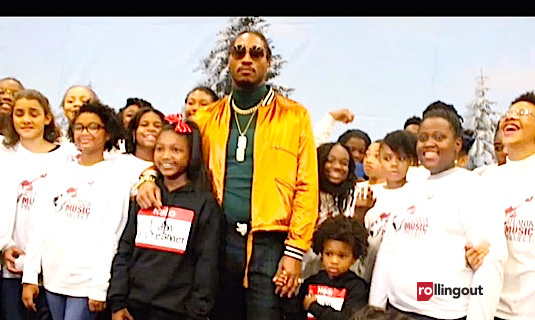 Armchair detectives have pretty much concluded that Lori Harvey has been in a relationship with prolific baby producer Future for a few months now.

But for the first time, Steve Harvey’s step-daughter has provided fans with confirmation that Future is her latest boo.

The socialite and Instagram model was down in Montego Bay, Jamaica, celebrating her 23rd birthday with Future, 36, and fellow IG star Jordyn Woods, who is 22.

Some time during the escapades in the Caribbean island nation, Harvey posted an Instagram Live video showing Future giving her an affectionate kiss on her cheek. It is no longer available online but it was captured by the likes of The Shade Room and TMZ.

Harvey captioned the IG Live post “Life is good.” And it certainly appears that way since Harvey reportedly moved into Future’s Los Angeles-area home right after she finished dating Diddy.

During the trip, Harvey also recorded the romantic entrance to her room. Future put down a trail of rose petals leading to her bed – which was also covered in petals in the shape of a heart.

Some fans put Future on blast because he reportedly gave the same gift to other girlfriends of his, including his baby mamas Brittni Mealy and Joie Chavis.

Oop!! The #Roommates may have spotted #Future in the background, and it looks like he is also on site for #Lori’s birthday turn up!! (view previous post)